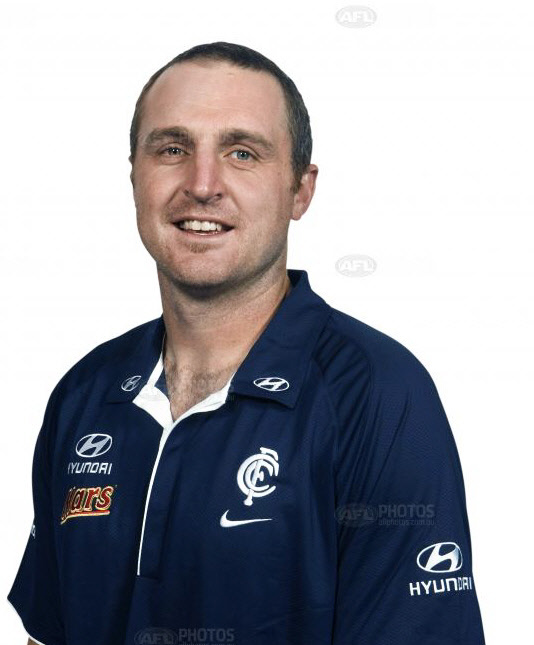 In 2009, after an injury-shortened career at North Melbourne and St Kilda, two-time premiership player Mathew Capuano joined Carlton to coach the Blues ruckmen on a part-time basis. Within 12 months he was employed full-time in the role, and has been part of the club’s senior coaching panel ever since.

Originally from Creswick in central Victoria, Capuano was playing with Geelong’s Under 18 team in 1992 when he was drafted by North Melbourne at number 55 in the National Draft. A 198 cm athletic ruckman-forward, he was destined for an early senior debut before the first of many injuries sidelined him for over twelve months, and he did not play his first AFL game until June, 1994.

In an up and down career with the Shinboners over the next six seasons, Capuano played in three Grand Finals (1996, 1998 and 1999) winning two (’96 and ’99) and losing the other to the Adelaide Crows. In between, he suffered serious to each of his knees (in ’95 and ’97), and the first of these required a full reconstruction.

By 2000, the presence of Corey McKernan and Wayne Carey had squeezed Capuano out of North’s line-up, and he was lured to St Kilda. Unfortunately for both parties, the deal didn’t work out. Plagued again by shoulder and knee trouble, Capuano managed only 25 games over three seasons. Midway through 2003, he was controversially sacked by Saints coach Grant Thomas, who claimed that he wanted to encourage the club's younger ruckmen, and to spare Capuano the “indignity” of finishing his career in the VFL.

Capuano immediately retired as an AFL player, amid a storm of controversy that lasted until the AFL Players Association secured an agreement that its members could no longer be discarded by clubs until the end of each season – apart from “exceptional circumstances” - and then only with the specific approval of the AFL Commission. Now known as the “Capuano Rule” it has since been widely accepted and only rarely invoked.

Although a number of other AFL clubs expressed interest in him, Capuano’s career ended when he finished with the Saints. After a long holiday in Europe, he came back to Australia and played one last season with South Fremantle in the WAFL in 2004, before heading off down the road that eventually led him to Princes Park.