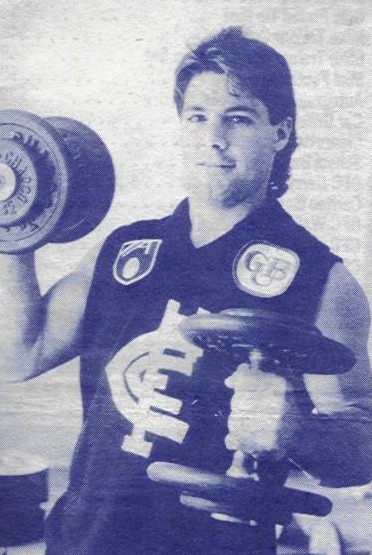 Mark Arceri played the early part of his senior football at VFA club Williamstown, before being picked up by North Melbourne in 1984. At 170 cms and 70 kgs, he was an archetypal rover who was deadly around the goals.

Despite suffering some bad luck with injury, he played 70 games and booted 102 goals for the Roos in seven seasons, then was cleared to Carlton in 1991. Wearing guernsey number 17, Arceri played 17 games for the Blues in 1991-'92, and booted 26 majors. Two of those games are worthy of note.

The first, in round 8 of 1991, saw Carlton play Hawthorn at Waverley. The Blues were beaten by 44 points, but Arceri gathered 19 kicks - 10 of which were frees!

Two weeks later, at the Western Oval, Carlton lost to Footscray by 41 points on a dreadful day when the visitors could manage only 1 goal, 10 behinds - our lowest score ever against the Bulldogs. Mark kicked our solitary goal from a free kick in the last quarter, with only minutes remaining on the clock.

In 1993, Arceri saddled up for his third club when Carlton cleared him to St Kilda. In his final VFL season with the Saints, he managed five more games and five more goals, before returning to Williamstown for one last year at the club where he his father Tony had served as President in 1975.