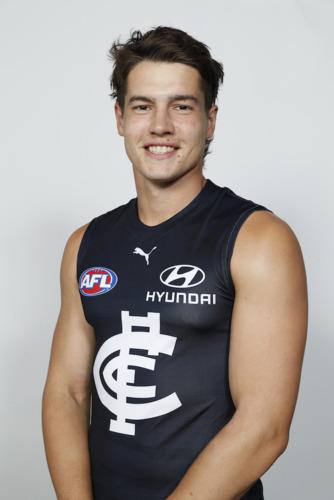 
The Liam Stocker trade was one of the big talking points from the 2018 National Draft. The Blues made a bold move to perform the first ever live trade of draft picks to facilitate his recruitment to occur. Carlton traded it's future first round pick for the 2019 National Draft in return for the Adelaide Crows' future first round pick of the 2019 season plus pick 19 which the Blues used for Liam Stocker. Stocker won the Morrish Medal in the TAC Cup after storming home in the back end of the season, having missed the NAB AFL Under-18 Championships with a broken jaw. He is a big and strong midfielder who is great at the stoppages, a nice kick on both feet. An articulate, confident character who might have been ranked a little higher if not for his interrupted first half of the season.

The exciting youngster impressed onlookers with his performances in the midfield, where he combined his grunt on the inside with class on the outside. Equally adept by hand or foot, Stocker is also a versatile prospect, given he hits the scoreboard when he goes forward. It was the combination of his ball use and his burst of speed which convinced the Blues to call out Stocker’s name at the draft, despite missing the under-18 championships through injury. A well-rounded, natural footballer, Stocker averaged over five clearances and four tackles to go with his 22 disposals in the TAC Cup. He earned a reputation as one of the draft crop’s premier ball-winners.


Liam Stocker was recruited from Sandringham Dragons, prior to that he played his football at Old Haileybury FC, Haileybury College and East Sandringham.