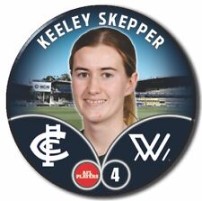 Named in the Under 18 All-Australian team, Keeley Skepper and hailing from Wodonga, the ball-winning midfielder - selected by the Blues with their opening selection at pick No.17 (Victorian pick No.8) in the 2022 NAB AFL Women’s Draft - has developed into a powerful prospect over the past couple of seasons which saw her take out Vic Country’s Most Valuable Player award at the national championships. Skepper’s leadership credentials were on full display at the Murray Bushrangers, averaging over 24 disposals, four tackles and four inside 50s across her nine NAB League games.

A midfielder who breaks the lines, Skepper spent more time behind the ball in 2022, with her ability to read the game and provide run and carry from the back half that is most impressive to recruiters. For a light build, Skepper continually puts her body on the line and wins the hard ball in the contest, and she led from the front for the Bushrangers in the NAB League and Vic Country at representative level. Carlton General Manager of Women’s Football Brett Munro said Skepper’s talent, consistency and versatility made her a standout prospect. “Keeley is a great pick-up for the program and I have no doubt that she will only add to the current talent we have,” Munro said. “She puts in her all every game. She's an impressive kick and has great football smarts, proving herself in the national championships by winning the medal for best player for Vic Country: she is rightly one of the top prospects in her draft class. “We rate her extremely highly for what she brings on the field just as much as what she brings off it. “We’re excited to see Keeley blend in with the rest of the team and are confident that she will feel right at home with the Game Changers.”