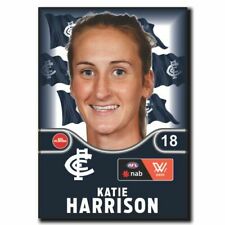 Katie Harrison joined Carlton as its first AFLW rookie for the 2020 season. Harrison, a development player in the 2017 Australian Rugby Sevens side, follows in the footsteps of fellow converts Chloe Dalton and Brooke Walker who joined the Blues last season and played in the Club’s maiden AFLW Grand Final. Harrison is a naturally gifted athlete with elite speed and endurance, which will complement the current playing list at Carlton.

Harrison did not manage to play a Senior game withe the Blues.