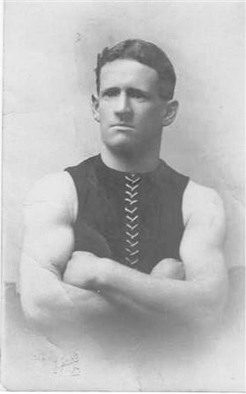 Jim Tumilty was a pint-sized rover-forward from Tasmania whose playing career at Princes Park spanned precisely three days. Over that short space of time, he lined up in two matches for the Blues, and ended his career undefeated. Later, he joined the army to fight in World War 1, and suffered severely from disease and gas attack.

Tumilty came to Carlton from the Mechanics Football Club in Launceston, Tasmania. He was 23 years old when he made his debut for the Blues against Fitzroy at the Brunswick Street oval on Saturday, June 4, 1910. This was round five of the season - the King’s Birthday holiday weekend - although the recent death of the reigning monarch; Edward VII, had understandably cast a pall over the celebrations.

Playing out of a forward pocket, Tumilty was part of a clinical 41-point victory by the Blues, built around the dominance of rovers Alex Lang and Andy McDonald, and five good goals to full-forward Vin Gardiner. From a modern perspective, it is almost impossible to comprehend, but only 48 hours later – on the holiday Monday – Carlton played another match for Premiership points when they met University at the East Melbourne Cricket Ground. The rampant Blues despatched the students by six goals, and Jim made it a memorable day by kicking his first and only career goal from a half-forward flank.

Tumilty was omitted from the side after that, and sometime later in the year departed from Princes Park to return home to Launceston. He spent the next few years driving a team of horses hauling logs from the forests of northern Tasmania, until World War 1 erupted in August 1914, and he joined the many hundreds of others from surrounding districts who volunteered for military service.

Just over 12 months later, Jim found himself on the slopes of the Gallipoli Peninsula, under heavy shellfire, and short of water and sanitation. Within weeks, he had contracted typhoid fever so severe that he was evacuated home to Australia for three months to help him recover.

By September 1917, Tumilty was back in action in the trenches of France - only to be caught in a gas attack that almost killed him a second time. He survived, but never regained full fitness after that, and saw out the last stages of the war as a Corporal in a supply depot.

He made it back home to Launceston in 1919, and resumed working with his beloved horses. The 236th player to represent the Old Dark Navy Blues, Jim died in August, 1953, at the age of 67.

"Tumulty is leaving Carlton. He was granted a clearance on Tuesday, and goes over the way to Brunswick." (Herald June 24 1910 p2)