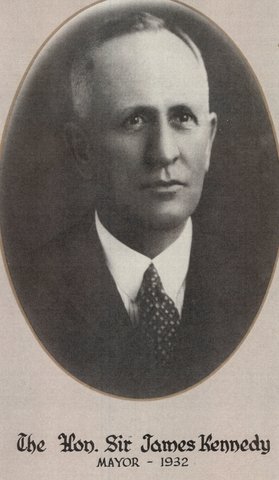 Another prominent figure in a long list of high achievers to have passed through the portals of the Carlton Football Club, James Arthur Kennedy was an accomplished footballer, accountant, public servant, politician - and ultimately - Knight of the Realm. The younger brother of the Blues’ champion triple premiership wingman Ted Kennedy, Jim played 26 VFL matches with Essendon and Carlton, then spent the remainder of his long working life in the service of his community. In 1950, his achievements were recognised when he was knighted in the King’s New Years Honours list.

The youngest in a family of six, Kennedy was born in Parkville in 1882. He grew up opposite the wide expanses of Royal Park, where his life-long devotion to the sports of football and cricket were nurtured. After attending Errol Street State School in North Melbourne - where he was an exceptional student – he was awarded a scholarship to Parkville Grammar School, and from there won another scholarship to Scotch College. On the sporting field, Jim was a 'forceful bat' for the Carlton Cricket Club in summer, and a star with Parkville in the local football competition during winter.

In 1901, Ted and Jim Kennedy were recruited by Essendon. Both were quick, agile athletes, at their best either roving, or out in the open spaces on the wing or a flank. At 173 cm and 80 kg, Jim’s stocky, broad-shouldered build made him taller and heavier than his lean brother, although he shared Ted’s calm temperament and genial nature.

Ted soon became a regular senior player for the Dons, while Jim’s studies restricted him to just three senior games in his only season in black and red. Essendon met Carlton in two of those matches, and Jim’s cleverness around the goals saw him boot four goals on each occasion. Considering that his total at Essendon was nine goals - and that he scored eight of them against the Blues - it’s easy to see how Carlton were impressed.

Three years later, in 1904, Ted Kennedy walked out on Essendon and joined Carlton. By that stage, Jim had not played VFL football for two years, but the Blues were convinced that he still had plenty to offer. Eventually, Carlton coach Jack Worrall talked Jim into making a comeback, and by coincidence, he played his first game in navy blue against Essendon at Princes Park in round 1, 1905. Lining up on a half-forward flank, the younger Kennedy provided a lively target, and kicked his first goal for his new club in an 8-point win. Ted, meanwhile, controlled his wing, and was one of the Blues’ best throughout a close and entertaining game.

Jim went on to play another 17 matches that year, contributing an impressive 19 goals as the Blues – after a miserable first eight seasons in the VFL – began building toward the unprecedented glory of triple Premierships in 1906-07-08. Ted Kennedy became a Carlton immortal during those years, starring on the wing in all three Grand Finals. Jim, however, played only five more games over 1906-07 and had finished his VFL career before his 26th birthday. Although he continued to enjoy the game by regularly pulling on his boots for Brighton Juniors for a few more seasons, Jim’s priorities had turned to matters off the field.

By 1904, Jim was a qualified accountant employed by the Melbourne Electric Supply Company, on the way to becoming a fellow of the Commonwealth Institute of Accountants and the Chartered Institute of Secretaries. In 1913, he married Annie Taylor Biggins at the Congregational Church, Carlton. The couple bought a home in Brighton, and soon celebrated the birth of two daughters. In 1920, Jim was appointed chief accountant of the MESC, and secretary of the company seven years later.

In 1928, Jim entered politics and won a seat on the Brighton City Council. At the height of the Great Depression in 1932 he was elected Mayor, while also serving as treasurer of Brighton Community Hospital. One of his first initiatives as Mayor was to cancel the annual Municipal Ball, and use the funds to buy shoes for the children of the district’s unemployed.

Although the MESC was taken over by the State Electricity Commission in 1930, Jim continued as secretary of the company and its subsidiary; the Melbourne Investment Trust. When the liquidation of the MESC was completed in 1940, Jim went into private practice with his own public accountancy firm situated in Collins Street, Melbourne.

In 1937, Kennedy successfully stood for election as the United Australia Party candidate for the province of Higinbotham, and later led his party in the Upper House. Committed to the ideals of service and duty, he never missed a parliamentary sitting until the last weeks of his life, and never left the chamber before the day's business was completed. He was the Minister of Transport and Mines in the Dunstan-Hollway coalition government of Victoria from 1943 to ’45, and Commissioner of Public Works in Hollway's state government of 1947-50.

A great believer in co-operative housing societies, Kennedy campaigned ceaselessly for their extension. He introduced the 1944 Co-operative Housing Societies Bill to the Lower House, and became chairman of the Deakin Co-operative Housing Society, which was established to assist immigrants in particular. Throughout, Jim continued to find time to indulge his passion for sport. In 1945 he was President of the Brighton Cricket Club, and was appointed a trustee of the Melbourne Cricket Ground.

In 1950, Jim’s lifetime of service to others culminated the award of a knighthood for services to the community. A man of deep religious faith, Sir James was a strict teetotaller all his life, and devoted considerable time to the church. He was Treasurer of the Victorian Congregational Union for over twenty years, and its chairman in 1940-41. During that that time he put particular emphasis on the church’s welfare work, and the establishment of the Tanderra Home for the Aged.

Jim Kennedy died on 20 November, 1954 at Brighton, aged 72, and was buried in Melbourne General Cemetery. In 1957, a memorial window commemorating his life was unveiled in the Brighton Congregational Church.