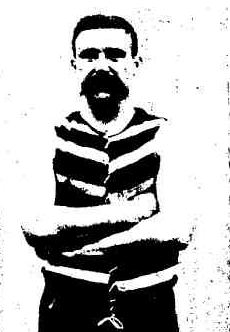 1893 J. Gullan and Robert "Bob" Gullan played against St.Kilda at St.Kilda on July 01
He was named among Carlton's best in the losing side.

1893 Played in the losing Carlton team against Fitzroy on the M.C.G. on July 15

Photo: James Gullan in his East Fremantle guernsey, this was published in the Western Mail June 04, just nine days before his death.

1894 With the economic depression at it's height many Victorians headed west to the gold fields towns of Coolgardie and Kalgoorlie to try their luck. James was no exception and made the journey to the other side of the continent. He found himself in the gold rush town of Coolgardie which then had two football teams, Coolgardie and Rovers.
At Rovers "Carbine" Gullan was made captain for 1894. How long James spent in Coolgardie at this stage is unknown.
But by 1898 he was a little further east by 35 miles in the boom town of Kanowna.
Kanowna is located 20 miles east of Kalgoorlie and is now a ghost town. It was gazetted in 1894 after gold was discovered the previous year. It's population had risen to over 12,500 by 1899, however the gold began to run out and during the Great Depression of the 1930's the railway was closed, and in 1953 the town was abandoned. (wikipedia)
The town once had 16 hotels, two breweries, and an hourly train service to Kalgoorlie, now, nothing remains except for the railway platform and the two cemetries.

1898 Kanowna September 18
"The committe of the White Feather Football Club met last evening and awarded medals to the players who distinguished themselves during the past football season. The chief one was a medal was presented by Sergeant Smith, formerly in charge of the polce station here, to "Carbine" Gullen, the crack follower of the team. It was an important medal and a splendid specimen of the goldsmith's art. It was presented for the best all-round player." (Kalgoorlie Western Argus September 22 1898 p8)
The White Feather Football Club had another Carlton connection in that their 1895 captain was J. Lorraine . (Western Argus August 22 1895 p5) White Feather was named after the gold mining company White Feather Main Reef Mining.
The "Featherites" competed against Kanowna Cement, Hannans, Kalgoorlie and Boulder City.


THE ONE AND ONLY "CARBINE"

"The most important item of the 1902 season was the joining up of the famous follower, Jim ("Carbine") Gullan, a man well worthy to rank with the great players the club then had. Little was thought then that this great player's association with the club was fated to end so soon and in such tragic circumstances. He met his death accidentally in the early part of 1904. "It was a great blow," Mr. Wilson remarked, "as he was such a splendid specimen of manhood. To friend and foe he was one of the kindest and friendliest of men and though a powerful player was alway fair."

1904 Perth
Mr Gullan passed away at the young age of 29 on the 13 June 1904. He died due to accidental poisoning. Having felt unwell the previous night, he went to take some castor-oil to settle his stomach, however, inadvertently, he chose a similiar looking bottle which contained boiler fluid, which was used by his roommate for corn cure. Having taken the fluid, he began to fall ill, however his roommate gave him a mixture of salt and water, which initially improved his condition. During the morning his condition worsened and he died that morning.
He had been playing for East Fremantle the preceding three years.

James a widower, worked as a baker and left behind a young daughter.

James Gullan is buried at the Fremantle Cemetery (Anglican Mon A plot 0896)
On a visit to Perth in August 2016, time did not allow this writer to visit the cemetery. If someone could take a clear image of James' tombstone and forward it to Blueseum it would be much appreciated. 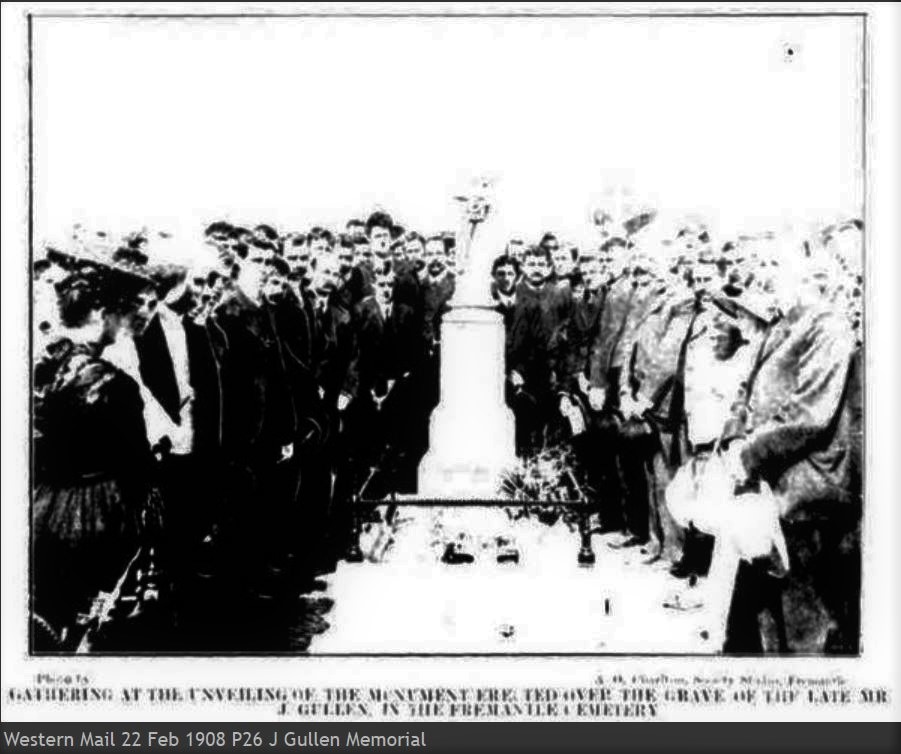