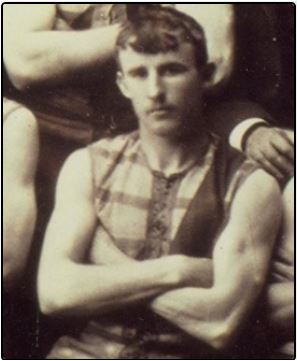 Recruited from Britannia in 1891


Jack/John McInerney ex Clifton F.C. and Britannia (pictured in the Britannia team, courtesy Collingwoodforever site )
Jack played 14 games for Collingwood in 1892 before playing with Carlton in 1893 and he returned to the Magpies the following season where he played a total of 39 games and kicked 5 goals.


1891
Played in the pre season match against the Combined Juniors at East Melbourne on April 25
May 02 played as a forward pocket for the opening match of the 1891 season against St.Kilda at St.Kilda.
Went to Collingwood in 1892.

1893
Back at Carlton played in Round 1 at Arden Street against North Melbourne.

1894 May 5
The VFA Permit Committee granted a transfer for J. McInerney from Carlton to Collingwood.
First name not mentioned, possibly John Henry McInerney.
McInerney was named as one of Collingwood's better players for 1894.

1894 September 13
The Herald (p3) reported that the Collingwood committee had disqualified Jacky McInerney, "from playing with the club for conduct inimical to the interests of the club."

The Argus, December 29, 1952, published a death notice for John Henry McInerney who played for St. Kilda and Collingwood, he was aged 82.
Same person?