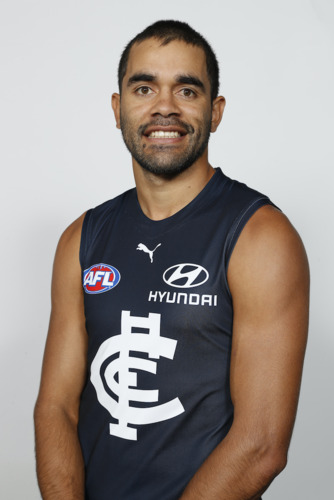 The Carlton FC via recruiting guru and Carlton legend Stephen Silvagni actively chased classy Suns midfielder at the end of the 2019 season. After initially being disappointed in not being able to get a trade completed prior to the National Draft they were able to secure his services as an uncontracted free agent. The mercurial Martin got his wish when he officially became a Blue in the NAB AFL Pre-Season Draft. Capable of producing a moment of magic, Martin oozes class and has shown his potential across his 97 career games for the Gold Coast Suns. Now arriving at Ikon Park, Martin himself believes he’s best suited to having an impact up forward, where he’ll link up with one of his idols Eddie Betts. Likely to push through the midfield to make an impact, Martin joins a significant West Australian contingent at the Blues with Patrick Cripps, Zac Fisher, Mitch McGovern and Sam Petrevski-Seton.

Martin was born in Broome, Western Australia to an Indigenous Australian mother (Yawuru) and father (Yamatji). The family moved to Geraldton, Western Australia when Jack was 12 years of age. He attended Geraldton Senior College during his high school years. Martin made his senior football debut for the Towns Football Club in the Great Northern Football League at age 15. His team would reach the GNFL Grand Final later that year and he would line up on future Gold Coast Suns teammate Jaeger O'Meara on the wing. He was recruited from Claremont Football Club, who played in the West Australian Football League with the first selection in the 2012 incentive Mini Draft, a special draft of players who were too young to be eligible for selection in the main 2012 AFL Draft. Gold Coast obtained the first selection in the mini draft by trading their first selection, the second overall, to Greater Western Sydney. As part of the mini-draft rules, Martin was unable to play for the Gold Coast Suns in the 2013 season, but did play for them in the 2013 NAB Cup preseason competition and then with the reserve team in the North East Australian Football League.

Martin made his AFL debut in Round 1 of the 2014 season against Richmond at Metricon Stadium. While attempting to take a diving mark in the fifth minute of the game, Martin injured his left AC joint and was subsequently substituted out of the game. It was initially feared he may be sidelined for the entire 2014 season but scans later revealed he would miss a minimum of two months. He was rushed back into the senior team for the Round 14 clash against Geelong despite not having played a game at any level since his injury. At the conclusion of the 2018 AFL season, Martin requested a trade from Gold Coast to a Victorian club. Essendon confirmed interest in signing Martin, but Gold Coast were not open to a trade. Martin played the 2019 AFL season at Gold Coast. At the conclusion of the 2019 AFL season, Martin again requested a trade to Victoria. Carlton and the Western Bulldogs were both interested in signing him. He is expected to nominate Carlton as his preferred destination. After the Suns and Carlton failed to reach a deal during the trade period, Martin became a Blue in the 2019 pre-season draft.

Martin put together arguably his most consistent season in his debut year at Carlton in 2020. His form was acknowledged by his teammates with nomination for the AFLPA MVP. A calf injury late in the season affected his output.