From half-forward to hero... 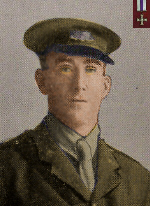 
John Mountsteven (Jack) Bristow played 28 games of VFL football with three clubs - Carlton, Melbourne and Richmond - prior to the outbreak of the Great War in 1914. When duty called, he was among the first to enlist - and demonstrated that not only was he a capable footballer, he was also a brave, resourceful soldier and an outstanding leader of men on the battlefield.

Born at Allansford, near Warrnambool in western Victoria, Jack grew up in Lancefield, where he showed promise in both his studies, and on the football field. Deciding to pursue a career as a school teacher, he enrolled at Melbourne Teachers College in 1909, and joined Carlton Juniors for a game of footy on the weekends.

A string of impressive games for the Juniors caught the eye of Carlton Football Club scouts, and an invitation to join the Blues soon followed. On Saturday, August 27, 1910, Jack Bristow burst through the streamers strung across the players’ race at Princes Park for his debut match against Richmond.

One of four first-gamers that day (along with John 'Jack' Massey, Tom McCluskey and Archie Wilson) Bristow played at half-forward alongside Jim Marchbank in a comfortable 17 point victory for the Blues, and held his place in the side for the last home and away match of the season against lowly St Kilda at the Junction Oval.

But in a huge upset, the Saints beat Carlton by 12 points in a game that was tainted afterward by accusations that some Blues had been bribed to play below their best. Jack Bristow was among those who lost their place in the team for the semi-final clash with South Melbourne, and he promptly decided that his football future lay away from the ructions at Princes Park.

In 1911 Bristow crossed to Melbourne, where his genteel occupation as a school teacher fitted in well with the club then known as the Fuchsias. He appeared in 21 games in one and a half seasons with the red and blue, then moved across Jolimont Park to play five more matches with Richmond in the latter part of 1913.

By early 1914 the dogs of war were straining at the leash in Europe. The governments of Germany on one side, and Great Britain and France on the other, were all spoiling for a fight, goaded by their military leaders. The eruption came in August, when German troops invaded Belgium. France and Great Britain came to their allies’ aid and World War One began.

Jack Bristow was one of the first Victorians to sign up for active service. He was assigned service number 589 and the rank of private with the 6th Battalion. What soon became obvious was that the well-built young man with auburn hair and pale complexion had definite leadership qualities. When his battalion stormed the slopes of Gallipoli on the morning of April 25, 1915, Corporal Jack Bristow led his four-man section into action for the first time and saw them safely through their baptism of fire.

After months of incessant enemy bombardment from the heights above Anzac Cove, winter set in to add more discomfort for the troops grimly defending the beaches. In the bitterly cold weather, Jack and hundreds of his comrades fell ill. He was diagnosed with acute pleurisy (inflammation of the lungs) in July, and evacuated first to Malta, and later to hospital in England where he made a good recovery.

By the time he returned to duty in August, 1916, the Gallipoli campaign had ended in an Allied withdrawal, and the 6th Battalion was fighting in the trenches of northern France. Jack took up where he left off, as a front line leader. In December of that year he was promoted to Sergeant, and just six months later was commissioned in the field with the rank of 2nd Lieutenant.

In October of 1917, on the first day of the offensive later named the Third Battle of Ypres (pronounced E-pray), the 6th Battalion was heavily engaged at a place called Broodseinde Ridge. When the attack faltered and men were being killed and wounded all around him, Jack Bristow was called upon to provide calm courage and leadership of the highest order, and he did it superbly. For his actions that day, Jack was afterward awarded the Military Cross – the third highest award for gallantry behind the Victoria Cross and the Distinguished Service Order.

His citation read;
On the occasion of the attack on Broodseinde Ridge on 4/5th of October, 1917, this officer, when his Company Commander and all officers except himself were casualties, led his company forward to capture, after resistance, a strong point on the ridge and consolidated his position on the final ridge. This junior officer showed great skill and judgement in the handling of his company.

That well-deserved honour also brought further promotion to full Lieutenant. As well, after more than three years of front-line service, he was also given a break from dicing with death every day and ordered to an administrative post. When Germany was forced into an Armistice on November 11, 1918, Jack Bristow’s war at last came to an end.

Under the rule of ‘first in, first out,’ those who had enlisted first and survived the war were sent home first. Jack returned to Melbourne in December 1918 and was discharged by a grateful nation three months later. He took up school teaching again, and was active with the Returned Serviceman’s League for many years. He never married, and passed away at the age of 68 in November, 1954.

After his death, Jack’s medals, his citations and other wartime memorabilia were donated to the Australian War Memorial by his family.