The other Ian Nankervis... 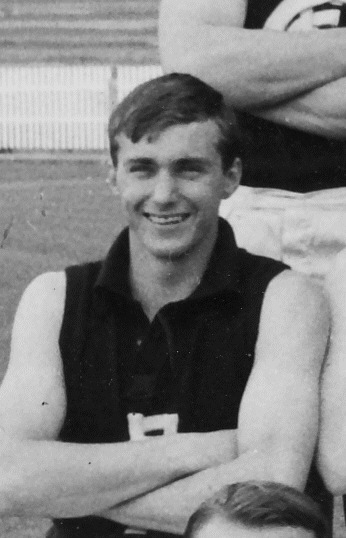 Ian Desmond Nankervis was a handy goal-kicking rover who played 27 games for the Blues between 1964 and 1966. He was Carlton’s leading goal-kicker in his first season, albeit with a very modest total of 18 majors. Afterwards, however, his career was almost completely overshadowed by another player with the same name; Geelong champion Ian J. Nankervis - who made his VFL debut in 1967 and played 325 games for the Cats. While captaining his club for five seasons, he represented Victoria 11 times, and was one of the first men chosen in Geelong’s Team of the Century.

Carlton’s Ian Nankervis was recruited from Mildura Imperials. A quick and lightly-built rover, he inherited the number 23 guernsey from Martin Cross, a fellow small man with a similar build and playing style. After making an eye-catching debut for Carlton Reserves against North Melbourne in the first game of 1964, Nankervis was included in the senior team the following week for the match against Hawthorn at Glenferrie Oval. He spent most of that game on the bench as 20th man, watching on while Hawthorn beat the Blues by 21 points.

Another Saturday afternoon warming the bench followed, before Ian was included in Carlton’s starting line-up for the first time when the Blues met Footscray at Princes Park in round 4. Nankervis started well in that match, and kicked his first career goal in the opening quarter, but after that, it was all Footscray and they ran out convincing winners by 31 points. Although Ian was a regular in Carlton’s senior team for the rest of that year, and notched up 18 goals from his 15 games, 1964 was the worst season in Carlton’s history to that point, and mediocrity is never tolerated for long at Princes Park.

In a stunning football coup, a new committee took power in the off-season, and rocked the game to its core by appointing Melbourne champion and captain Ron Barassi as captain-coach of the Blues for five years. Under Barassi, Nankervis found the going tougher, and a place in the senior side increasingly harder to claim. He managed eight first-grade appearances in 1965, and another four during the first six rounds of 1966, but after that, spent the rest of the year in the Reserves side.

Over the spring and summer of 1966-67, Barassi and Carlton’s match committee culled the Blues’ playing list, and Nankervis was among those who were told that their services were no longer required. Prior to the next season, he was cleared to Williamstown in the VFA. Twelve months later, his name was to hit the sporting headlines in regrettable fashion.

After enjoying a superb debut season with the Seagulls, Nankervis won the 1968 Field Medal as Best and Fairest in the VFA 2nd Division. Williamstown finished a game and a half clear on top of the ladder, before comfortably defeating Geelong West in the second Semi Final to firm into raging hot favourites for the flag. After that final, while being presented with his medal, Nankervis somewhat foolishly used the occasion to publicly criticise his coach Max Papley, and to demand more money. The Seagulls were outraged, and Nankervis was immediately suspended. He didn’t play in the Grand Final, and was sorely missed as Williamstown lost a nail-biter by 12 points to the persistent Roosters.

In 1969, Nankervis was traded to Dandenong, and Williamstown earned their delayed promotion by defeating Sunshine in the Grand Final.