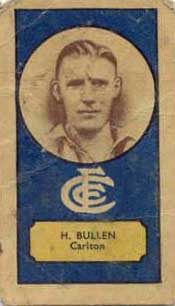 Perhaps our second most famous 'Horrie' after the great Horrie Clover, Bullen played 59 games across the mid-1930's. Bullen was born in Doncaster. He passed away on the 7th November, 1961 aged 55.

The Argus Friday 27 May 1932 on the eve of Horrie's debut said;
"Bullen, a Doncaster player of the vigorous type, whose services have been sought by several League clubs."

Horace Bullen was cleared to Somerville during 1935 and debuted in the blue and gold of the Mornington Peninsula club on June 14.
Horrie was still playing for Somerville in 1939 and was named best player for the club in the loss against Hastings-Tyabb, May 20.
"Horrie, though past his prime now, plays for the love of the game, and is to be congratulated on his fair play and good sportsmanship."


Of quite hefty build at 185cm and 91kg, Horrie Bullen failed to establish himself during his first stab at league football with Hawthorn in 1926. After managing just 2 senior games for the year he quit the VFL scene to join Doncaster, where he spent the next five seasons.

Carlton eventually spotted his potential, and enticed him back to the big time in 1932, when he was aged twenty-six; at the end of that year he played as a ruckman and kicked a couple of goals in the Blues' losing grand final team against Richmond. A sturdy, reliable, efficient performer, he went on to give solid service in 59 VFL games between 1932 and 1934 and in 1936 -7. He booted 38 goals. Most commonly used as a follower, he could also hold down a key defensive position.1