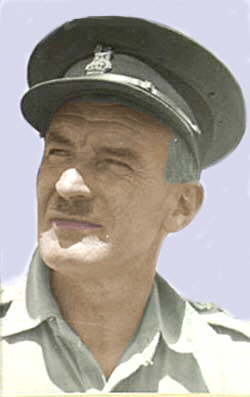 It is astounding that Australian Football in general seems to have almost completely overlooked the exploits of Herbert Giblin ‘Harry’ Furnell - surely one of the truly great figures to have represented the Carlton Football Club.

Harry’s brief but brilliant playing career with the Blues was cut short by the demands of his medical studies at Melbourne University in the years after World War 1. He graduated in 1921, then undertook further training overseas, before establishing a private practice in Abbotsford. At the same time, he served as an officer in the Medical Corps of the Australian Militia (a forerunner of the modern Army Reserve).

At the outbreak of World War II in September 1939, he was among the first 100 volunteers for overseas service, and went on to become one of Australia’s most decorated (and most revered) citizen-soldiers. He returned home after the war to further acclaim at the forefront of medical research and training, and was appointed Chairman of the medical committee for the 1956 Olympic Games.

Harry was born in Maryborough, in central Victoria on October 4, 1898. His father, George William Furnell, was the English-born governor of the local gaol, and his mother Florence was George’s second wife. A gifted student, Harry won a scholarship to Geelong Grammar School, where he also showed an aptitude for sport – especially Australian football - and for leadership within the school’s cadet corps.

His time at Geelong Grammar was spent in the shadow of the First World War, and this no doubt shaped his attitudes throughout the rest of his life. In his final year of study, his diligence and intellect was rewarded with another scholarship – this time to the medical faculty of Trinity College at the University of Melbourne. While there, he joined the strong University Blacks club and became a star in the ranks of amateur football.

A lean, long-striding, elegant forward, Harry next caught the eye of Carlton’s scouts and he was invited to Princes Park in 1918. Blues’ coach Norman Clark gave him the coveted number 1 guernsey, and Harry did it proud in his all too brief career. Although his studies sometimes prevented him from training with the team, Harry played nine games and kicked 12 goals from centre half-forward in his debut season – including two memorable majors in Carlton’s narrow five point loss to eventual premiers South Melbourne in that year’s first Semi-Final.

In 1919, with the Great War in Europe finally at an end, Harry’s continuing good form bore fruit when he was selected in the Victorian State team, but he managed just four more games for Carlton that year, before the pressure of his studies forced an end to his VFL career. Harry graduated in 1921, and opened a private practice. In April 1924, he married Marguerite McLean, who was to bear him a son and a daughter. He travelled to London and Edinburgh in 1927 to study surgical techniques, and to Dublin and Vienna to train in obstetrics. That same year he became a fellow of the Royal College of Surgeons, and back home, a Lieutenant in the Royal Australian Medical Corps.

By 1932 Harry had been promoted to the rank of Major, but on those weekends when he wasn’t training with his troops you would find him at a football match, urging on his beloved Blues. The principles of discipline, courage and service to others that guided him throughout his life, came to the fore again in September 1939, when Great Britain declared war on Germany and the Second World War began.

Within weeks, Harry was among the first to volunteer for active service. He was given the service number VX 73, and command of the 2/2nd Field Ambulance, which sailed for the Middle East in April 1940. He was soon in the thick of the action as the Australians advanced through Libya in January 1941. His unit history records that ‘Major Furnell was continuously forward, supervising the collection of the wounded under enemy fire’.

On January 27, during an air-raid near the town of Derna, he saved the life of a wounded soldier by carrying him to a slit-trench and maintaining pressure on a severed artery until help arrived. For this singular act of bravery, and others like it, he was Mentioned In Despatches on the first of four occasions. He was promoted to the rank of Colonel in February 1941, and from April to October that year, was among the 35,000 troops and 10,000 enemy prisoners encircled in the siege of Tobruk. Appointed Assistant Director of Medical Services, Harry was primarily responsible for maintaining the health of the garrison throughout the siege – a task he accomplished to wide acclaim.

Following the Tobruk campaign, Harry was asked to take responsibility for the medical support for the El Alamein offensive in July 1942. He established forward surgical stations for the treatment of the severely wounded, and introduced air evacuations, in a brilliantly successful ‘triumph of organisation and detailed planning.’ For his efforts at Tobruk and El Alamein, Harry was awarded a CBE (Commander in the Order of the British Empire). He was also Mentioned In Despatches again for further acts of personal bravery in June, 1942.

In 1943 Harry was promoted to the rank of Brigadier, and posted back to Australia as Deputy Director of Medical Services for the defence of New Guinea. He spent the following two years embroiled in that crucial campaign, fighting disease and a fanatical enemy in some of the harshest terrain on earth. Twice more – in April and October 1944 - he was Mentioned In Despatches for exceptional leadership in the field.

By July 1945, Japanese forces were in full retreat and the end of the war was in sight. Harry returned to Australia, and was placed in reserve. In November of that year he capped his military career, when he was awarded the Distinguished Service Order. In a classic understatement, the citation simply read; 'for efficient and competent leadership in the campaigns at Derna, Tobruk and Benghazi.'

Back in civilian life, Harry was appointed Deputy Director of Medical Services for the Citizens Military Forces of Southern Command in Melbourne from 1946 to 1951, and in 1962 he was appointed an honorary Colonel of the Royal Australian Army Medical Corps. During this time he was also able to rekindle his love of the game of Australian Football in general, and the Carlton Blues in particular.

While busy rebuilding his practice after the war, Harry was a consultant gynaecologist at St Vincent’s Hospital, and later (1953-’57) Dean of the hospital’s clinical school. He was involved in the planning of the Mercy Maternity Hospital (opened in 1971) and in the establishment of a Chair of Obstetrics and Gynaecology at the University of Melbourne. He served as President (1955) and Treasurer (1962-’72) of the Victorian branch of the Australian Medical Association, and was largely responsible for financing the building of the AMA hall in Parkville. He was a board member of the British Medical Insurance Company and the Australasian Medical Publishing Company, and in 1956 he was a popular choice as chairman of the medical board of the Melbourne Olympic Games.

Harry’s life journey ended on the 22nd of November 1973, when he passed away in East Melbourne. His grave can be found at Springvale cemetery. At his funeral a former wartime comrade, W.W. Lempriere, spoke of Harry’s courage, endurance, high principles and sense of humour, while a medical colleague, Sir Geoffrey Newman-Morris, told of Harry’s ‘kindness, gentleness, and the firm and decisive manner in which he served the profession he loved and adorned so well.’

Harry Furnell was an extraordinary man, a brave and resourceful soldier, a gifted footballer and a great human being. And he was one of ours.

Why no Brownlow votes for Full Forwards