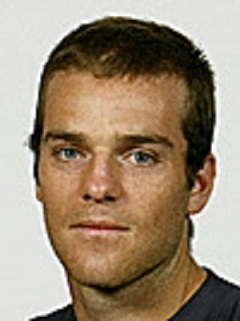 A strongly-built and versatile former Port Adelaide player who was recruited by Carlton in the 2008 Rookie Draft, Greg Bentley wore guernsey number 47 throughout the 2009 season with the Navy Blues, and played five senior matches - each of which was remarkable in its own way.

After starting out with the Rosebud Blues Football Club on the Mornington Peninsula, Bentley joined the Dandenong Stingrays in the TAC Cup Under-18 competition during his mid-teens. In 2005 he was judged Best and Fairest for the Stingrays, and that led to him being picked up by Port Power in that year’s Rookie Draft. He was promoted for his first senior game for the Power against the Western Bulldogs in Darwin in August, 2006, and steered through a goal with his first kick. Between then and September 2008, he played at total of 21 games, only to then be told that his services were no longer required.

Later that year, Carlton threw Greg a lifeline by selecting him with the club’s third round pick (number 37) in the 2008 Rookie Draft. When the 2009 season got underway, a couple of stand-out games in the VFL with the Northern Bullants kept him in the selector’s sights, and he was promoted for his first senior game for his new club against Hawthorn at the MCG on a Saturday afternoon in round 6. In one of the games of the season in front of almost 70,000 fans, Bentley began the game from the interchange bench and all but celebrated victory - but Brendan Fevola’s set-shot for goal after the siren brushed a goal post, and the Blues went down by 4 points.

Eight weeks later, Greg returned to the Blues seniors for the first of four games in succession – each beginning from the bench, and each notable for different reasons. In round 14 against Fremantle at Subiaco, Carlton wore bright yellow guernseys in support of the Livestrong Foundation, and won by 15 points. The following week at the MCG, Carlton comfortably beat Richmond and Fevola kicked 9 goals. In round 16 at Docklands, Carlton broke a 12-game losing streak with a massive 10-goal victory over Sydney, before the team crashed in a heap and was demolished by Collingwood in front of another huge crowd on a Friday night at the MCG in round 17.

Bentley lost his place in the side after that, and wasn’t recalled before the Blues’ season ended with a final-quarter fadeout against the Brisbane Lions in an Elimination Final at the Gabba. He was then cut from Carlton’s list in an end-of-season cleanout, and headed back to his original club Rosebud.

Bentley played with Rosebud from 2010, the following season he won the leagues best and fairest award. In 2015, Bentley filled the role of an assistant on-field coach at Rosebud, helping to lead the Blues to the Nepean Football League Premiership with victory over Somerville in the Grand Final, he was still representing them in 2018.