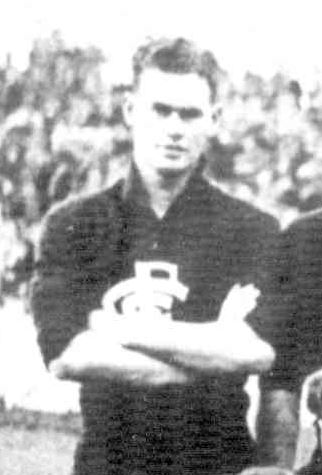 Carlton first tried to lure Graham Tudor to Princes Park in 1942, but the strapping young follower from Tasmanian club Cananore told the Blues that he wasn’t going anywhere until he had completed his university degree. At that time, World War II was raging across the globe. Australian soldiers were heavily engaged on almost every front, while at home, VFL football was struggling to survive because of the shortage of quality players.

To Carlton’s relief, Tudor graduated at last in 1943. He had also enlisted in the army by then, but because of his qualifications and expertise in the field of bearings and lubricants, he was assigned to the CSIRO (Commonwealth Scientific and Industrial Research Organisation) in Melbourne. Naturally, the Blues were delighted, and included him in the senior team for his debut match against Essendon at Princes Park in June.

In guernsey number 20, Tudor lined up on a half-forward flank that afternoon, alongside Jack Wrout and Charlie McInnes. Carlton skipped out to a good lead at quarter time, before the Bombers worked their way back into the contest and won a cliff-hanger by just 6 points. Tudor kicked a goal early, but from then on was used almost exclusively as a follower or second ruckman.

He managed a total of seven games and two goals in 1943, and another 12 games and four goals in 1944, before his research duties called him away and brought a premature end to his VFL career.

Tudor continued working with the CSIRO right through the war years. When he was discharged in 1945, he joined the giant Australian Paper Manufacturers Ltd (APM) and was appointed the company’s senior development engineer. He stayed with APM throughout the remainder of his working life, until his eventual retirement in 1982. Seventeen years later – in April, 1999 – Graham Tudor passed away, at the age of 78.