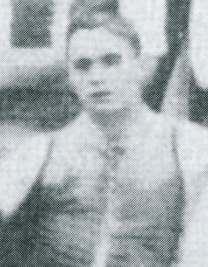 Recruited from Rainbow, a local Fitzroy club, in 1890.

G. Mackie, pictured left.
This photo was taken on the 1890 trip to Sydney.

1890 August 30
Mackie was named in the 22 for Carlton that played Williamstown at Williamstown.
As Batters and McKenzie did not play, there is a good probability that Mackie did play, and made his debut for the Blues.
However, there is no mention of him in the brief match reports.


1890 September 06
The next week Carlton played South Melbourne at South Melbourne.
"Mackie a recently promoted junior, distinguished himself by his coolness and dexterity amongst the forwards."

1890 September 20
G. Mackie played in the match against Geelong at Geelong.

1890 September 27
Mackie played in the final match of the season against Fitzroy at Brunswick Street.