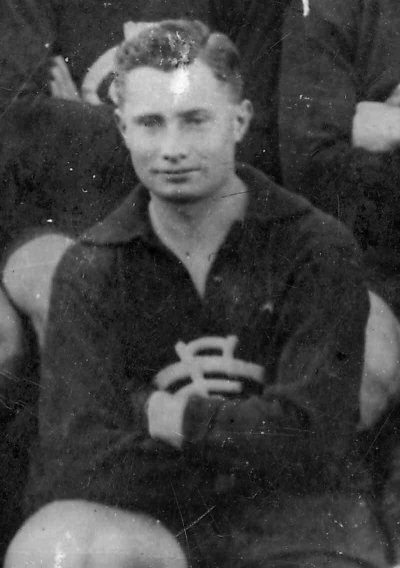 
Fred Gilby, that solid half-back who is known to his supporters as "Safety First" (Sporting Globe Feb 07 p6 1931)

Born Frederick William Gilby at South Melbourne in 1907, Fred Gilby grew up in Melbourne’s northern suburbs, and began his senior football career with VFA newcomers Coburg at the age of 17 in 1925. By early the following year, Fred had been drawn to Princes Park, where he became an automatic selection in Carlton’s senior team for the next 12 seasons.

Gilby’s cherubic features and solid build masked a fierce competitor with pace, steely concentration and a real appetite for the contest. Cool under pressure, he was a natural defender who backed his judgement and relished the physical clashes. The Navy Blues were consistent finalists throughout Fred’s career, and although he wore his number 6 guernsey into finals matches on twelve occasions, he faced off just once for Premiership glory – in the classic 1932 Grand Final against Richmond.

Carlton went into that game – our club’s first flag decider since 1921 – as slight favourites against a Richmond combination that was rapidly becoming Carlton’s bogey team. The Blues clung to a four-point lead with five minutes to play, but couldn’t withstand Richmond’s last-ditch desperation and were beaten by 11 points - despite five goals from our champion full-forward ‘Soapy’ Vallence, and the tireless efforts of our half-back line of Gilby, Gordon Mackie and Eric Huxtable.

Gilby’s career was marked by consistency - he played 76 consecutive matches between round 6, 1927 and round 4, 1931 - and coincidence. Both his first and last games were played on August 28, and both had the same result, with Carlton winning by 22 points.