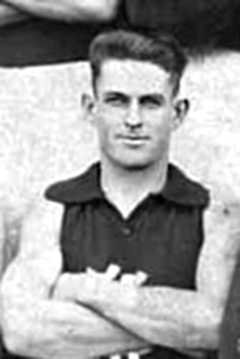 For four years before his burgeoning VFL career was cut short by the pressures of studying for his medical degree, Frank Donoghue was an automatic selection in Carlton’s senior team. A reliable and determined defender who came to Princes Park from University Blues in 1925 (he had also had a stint with Gippsland team Rosedale) he played 51 matches in navy blue during the first turbulent years of the Great Depression.

Donoghue’s debut match was an auspicious occasion – not just for Frank, but also for the Carlton and Footscray clubs. North Melbourne, Hawthorn and Footscray were all admitted to the VFL in 1925, and on Saturday July 18, the Blues and the Tricolours clashed on the hallowed turf of Princes Park for the first time. Wearing guernsey number 18, Frank was assigned to a half-back flank, and impressed with his maturity in a 13-point win to the Blues. He made another six appearances before that year ended, with Carlton languishing ninth on the 12-team ladder.

In 1927, as the American stock market was rocked by the first tremors of the financial earthquake to come, Donoghue’s evolving combination with the dashing Alex Duncan across half-back helped to lift the Blueboys into a Semi Final meeting with Richmond. The pair were resolute all match for Carlton, while Maurie Beasy battled hard in the ruck and feisty rover Tommy Downs kicked four goals. Even so, Richmond were steadier in the crucial final minutes, and won a thriller by six points.

When the Blues and the Tigers met in the first week of the finals one year later, more than 66,000 fans packed the MCG hoping for another epic clash. But after Duncan rolled an ankle and limped off, Richmond took control and thrashed the Blues by nine goals. Well before that defeat, Donoghue had decided that the last match of 1928 would signal the end of his VFL career. He was studying hard for a degree in medicine at Melbourne University, and could no longer spare the time required to train and play at elite level. Respected and popular among his team-mates, he was a considerable loss.

After completing his degree, Dr Donoghue undertook post-graduation work, married, and settled at Leongatha. By the outbreak of World War II in 1939, he was an active member of the Militia (Army Reserve) where he held the rank of Captain. He transferred to the AIF in 1942, rose quickly through the ranks to Major, and spent the remainder of the war years in various postings in hospitals and training establishments in the southern states. In May 1946, he was discharged, and returned to private practice. Later, he and his family moved to Ballarat, where Dr Donoghue passed away in May, 1971 at the age of 66.