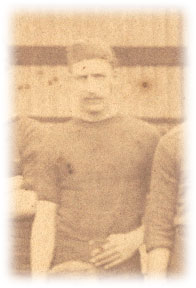 1881 A new recruit from West Melbourne and did well.
An interstate representative and shone during 1881 season.
(Centenary Souvenir of Carlton Football Club, p15)

1881. Plays a hard determined and skillful game when entrusted with a following commission, is apt though, to play selfishly, which is at all times not conducive to success, is no doubt a valuable acquisition.
(The Footballer 1881. p23)

1882. One of the best players for the season.
(Centenary Souvenir of Carlton Football Club. p16

1883 September 01
Early in the 1883 season Frank Conway transferred to Melbourne. However, in a match against Carlton on September 01 on the Brunswick Street oval Frank broke his knee cap, which was a possible career ending injury.