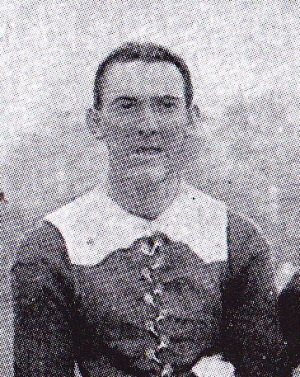 The youngest of three brothers who all played VFL football in the first decade of last century, Ernie Kelly appeared in only a handful of games in his one season at Princes Park, showing enough potential during that short time to suggest that his departure may well have been regretted at a later date.

All three of the Kelly brothers; Otto, Harvey and Ernie, were born in Melbourne, but established their football credentials in Western Australia. Otto and Harvey were team-mates at South Melbourne in 1902, before heading west to join Ernie at East Fremantle the following year. Harvey Kelly was an outstanding footballer; a powerful, long-kicking follower-forward who would eventually play in Premiership teams on both sides of the continent – including back to back flag victories with Carlton in 1907-08.

Ernie Kelly was taller and heavier than Harvey, and more of a true ruckman-forward. Like his brother, he loved kicking goals – as he demonstrated when he was East Fremantle’s leading goal-kicker in their Premiership year of 1904. At the end of that season, in one of WA football’s early controversies, all three Kelly brothers were part of a mass exodus of players from Old Easts to neighbouring South Fremantle.

In 1907, Harvey returned to Victoria to play with Carlton, and proved himself a star at centre half-forward as the Blues secured their second flag with a desperately narrow 5-point Grand Final victory over South Melbourne. Probably encouraged by Harvey, Ernie turned up at Princes Park prior to the next season, and the brothers ran out for the first time as Bluebaggers to share in Carlton’s good win over Melbourne at the MCG in round 2, 1908.

In fact, Ernie was even more impressive on debut than Harvey had been – following up some heavy work in the packs with some big marks up forward and three good goals. That fine debut meant that Ernie held his place in the side for the following week, but after that, competition for places got somewhat tougher - as could be expected in a team that was gunning for its third straight flag.

Ernie had played five senior matches by round 12, after which he was omitted until round 15 - when he recaptured his best form and booted three goals in another emphatic win over South Melbourne at Princes Park. He then held his place through to round 17, only to be left out the following week when his captain ‘Pompey’ Elliott returned from injury. From then on, Ernie wasn’t able to force his way back into the side, and surely sat in frustration on Grand Final day when Carlton completed the first-ever hat-trick of VFL Premierships, with a grafting nine-point win over Essendon.

Sometime after that triumphant Saturday afternoon at the MCG, Ernie Kelly left Princes Park for good, and returned to Western Australia.