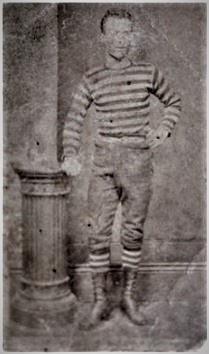 1876 Edward Barrass was playing with Carlton Imperial.
In 1876 he was one of the vice presidents and the secretary of Carlton Imperial.
The Footballer 1876 had this to say about him;
"One of the best in the team, can play back or follow, the former best suited to his temperament; not very fast, but works hard."

1878 A painstaking and energetic forward, unlucky at times in securing the ball. A good and useful player.
(The Footballer 1878. p31,)

1879 "Ground Lark", Has played a determined and good forward game; rather tardy in kicking but very difficult to shake off.
(The Footballer 1879. p28)

Ted Barrass mentioned as one of Carlton's better players in 1880.
(The Carlton Story, H.Buggy and H.Bell, p48)

1881 Still plays in the same fearless manner as ever, with a penchant to hold the ball too frequently; the quick, active play of the times has proved his peculiar style of hanging on the ball to be more showy than effective.
(The Footballer 1881 p23)

1881 May 07
The Australasian newspaper mentions that three South Melbourne players are to cross to the Melbourne club.
Two replacements for these players maybe Carlton's Frayne and the recently retired Carlton player Barrass.

1881 Went to South Melbourne for part of the season and later returned to Carlton.

1883 Barrass and Mick Whelan were suspended by the club for misconduct on the club trip to Maryborough. This led to a club revolt with 9 players resigning over the incident.
See August 1883

1891 June 13
E. Barrass was named in an "old players" Carlton team squad of 25 to play a charity match on the MCG against a similar Geelong team.

1923 July 6 (p4)
"Old Boy" of The Argus wrote about the best footballers ever to have played and he mentions Ted Barrass among the Carlton champions of the early 1880's.

1901 May 04
E. Barrass is named as a goal umpire for the V.F.A. match Richmond vs Footscray at Punt Road.

1908 June 08
"An old Carltonian footballer and International cricket umpire, whose lines have lately fallen on unpleasant places - to wit, Ted Barrass - had a collection taken up on his behalf at the Carlton-Geelong match at Carlton on Monday. It is said that his heart, which was always a big one, has been strained principally through the stress of a long athetic life. As straight as a die, his decisions on the cricket field have always commanded respect."
(Referee June 10 1908 p9)

1936
Ted Barrass passed away at his residence in Malpas Street East Preston on October 21, he was aged 72.