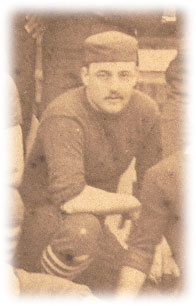 1879 One of the mainstays of the team, a 'colt of promise'
(Centenary Souvenir of Carlton Football Club p15)

1879 Carlton picked up some good new players during the season in Dick Frayne, Alick Coventry, E. Brookes, and T. Souter.

Brookes (above) is pictured in the 1881 Carlton team photo during the club's visit to Adelaide. He also appears in the 1884 team picture also taken in Adelaide.

1881 Possesses good marking and kicking qualities, and has proved himself to be a reliable goal sneak; at times his lethargic movements suggest a more active position in the field.
(The Footballer. 1881 p23)

1884 E. M. Brookes was presented with an illuminated address for his services to the club, held at the Carlton general meeting Friday 4th. April.