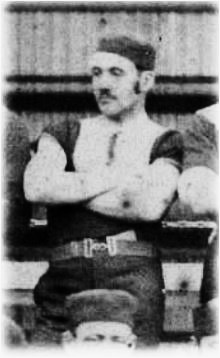 Richard was one of12 children born to John and Mary Frayne (nee McGoogin), both parents were from Ireland. John Frayne was a grocer in Windsor, a suburb of Melbourne. In 1864 the family were residing in Peel Street Windsor. In 1886 The Argus mentioned their house was at 74 Peel Street.
According to the Norwood history site, "The Redlegs," brothers Alexander Frayne and Nathaniel Frayne both were at Carlton and went to South Australia. Alex later went to Norwood and Nat to Port Adelaide where he captained the club on June 24 v South Melbourne on the Adelaide Oval 1882. South won 4.5 - 2.9 (Port Adelaide News June 23 p4 & June 27 p8)

Dick Frayne (above left) is pictured in the 1881 Carlton team photo taken during the club's visit to Adelaide.
The only known image of R. H. Frayne.

1879 One of the finest young players the club had ever developed. Sturdy and plucky, and very earnest either back or forward play.
Won the First Twenty drop-kick with 65 yards.
(The Footballer 1879. p28)

1880 Interstate representative, and one of the best Carlton men for the 1880 season.

1880 As a centre back player is much admired. Sturdy, sure and fast, and pretty effective in his runs. Guarded his position of importance right worthily.
(The Footballer. 1880. p23) 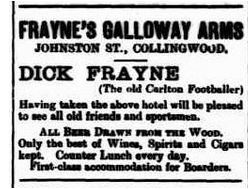 1880 Came second to George Browning in the First Twenty drop kick competition with a kick of 57 yards 1 foot, held at Princes Park on Saturday 9 September.

1881 Interstate representative, "as speedy and dashing as ever and a nonpareil* at kicking" and shone during the 1881 season. (-* having no equal)

1882 One of the best players for the season.

1883 The Argus Saturday 7th. April reports that at the Carlton Football Club general meeting last night, an illuminated address was presented to R. Frayne of the First Twenty.

Illuminated addresses were a popular way to mark special occasions.
Recipients received a hand painted scroll, and, or a medal, listing their achievements and an acknowledgement of appreciation from the club.

1883 Carlton Captain and a leading player for the season. 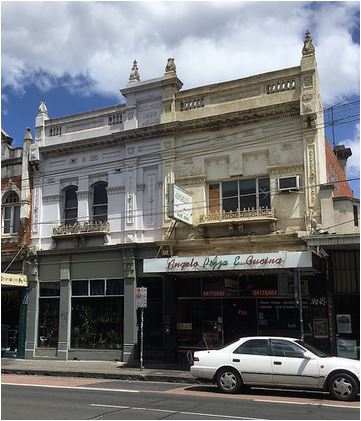 1891 June 13
Dick Frayne took part in an old players match between Carlton and Geelong at the M.C.G.
Proceeds were donated to to the Children's Hospital.
A report of the match said;
"Good heavens! to think that Dick Frayne, that ran like a deer, could ever swell so big."

1895 August 01
Local Industries
Hotel
Dick Frayne announces himself as licensee of the Galloway Arms Hotel, Johnson street, at which place the best of wines, beer, spirits, and an A1 cigar may be obtained. (Mecury & Weekly Courier)
The pub was known as the Galloway Arms from 1854 - 1911 and the Criterion Hotel from 1912 - 1914, then it was delicensed.

1895 October 03
The Mercury & Weekly Courier (p2) reported on the court proceedings of the theft of a pair of sheets which were the property of Richard Henry Frayne, from the premises of Galloway Arms Hotel. The accused was found guilty and sentenced to two months imprisonment.

1896 March 05
The Mercury (Fitzroy) reports that Dick Frayne was the publican of The Galloway Arms, Johnston Street Collingwood. He was charged at the Collingwood court of being drunk on the premises and resisting a constable in carrying out his duties.
To read the article, click here> http://nla.gov.au/nla.news-article58279520

1900 January 05
Richard Henry Frayne, was working as a clerk at the Fremantle Ice and Cold Storage Company in Western Australia.