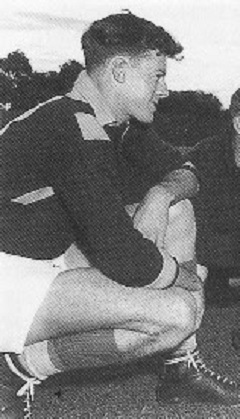 One of the tragic figures in the history of the Carlton Football Club, Denis Strauch wore Carlton’s number 22 guernsey in 29 senior games for the Navy Blues between 1957 and 1960. Five years later – after transferring to Port Melbourne in the VFA - he contracted the virulent blood infection tetanus, and died at the age of 28.

Prior to joining the Blues, Strauch had played senior football for Bendigo Football League heavyweights Eaglehawk at the age of 17. By the time he made his debut for the Navy Blues at centre half-forward against Hawthorn in round 1, 1957, he was a maturing 20-year old with an abundance of confidence. Although Hawthorn beat Carlton by six goals that afternoon, it could be argued that the Blues gained most from the match, because of the quality of the recruits on show. As well as Strauch, a quick little rover named Leo Brereton, and an impressive young ruckman from Maryborough in John Nicholls also started their senior careers in that game.

Strauch showed enough on debut to be retained in Carlton’s senior side throughout the season, even though it took another five games before he kicked his first goal from the key forward post. When he did start to score however, goals came in a rush. He kicked four against Fitzroy in round 6, and another eight between then and round 11. Carlton wound up the year in fourth place on the ladder, only to be knocked out of flag contention in the first week of the finals by Hawthorn. Still, Strauch ended his debut year with 19 games and 15 goals to his credit, and his prospects looked bright.

However, that early promise didn’t translate into a regular place in the Blues’ senior team from then on. Strauch managed only two games in 1958, one more in 1959, and seven in 1960 when he was moved back into defence where he was never really comfortable. After spending most of round 11, 1960 sitting on the reserves bench against Melbourne at the MCG, Dennis lost his place in the team and wasn’t recalled before the season concluded, and he was told that his services were no longer required.

After leaving Princes Park, Strauch joined Port Melbourne, where he became an integral part of the team and gave the Borough loyal service until June, 1965 - when the awful news spread that Denis had died in hospital after contracting one of the deadliest of all infections.

Although they shared the same relatively rare surname, Denis was not related to Dean Strauch, who was destined play for the Baggers some thirty years later.