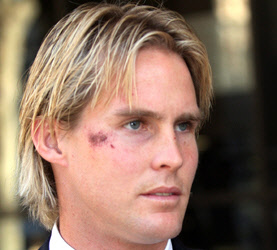 Blonde, baby-faced and fearless, David Teague played a total of 83 AFL games at North Melbourne and Carlton between 2001 and 2006, and prompted game-caller Dennis Cometti to sum up his qualities with the famous quote; “he looks like Jane - and plays like Tarzan."

After playing 33 senior matches over three seasons for the Kangaroos, Teague was traded to Carlton at the end of the 2003 season. Originally from Katandra (north-east of Shepparton), he had come under notice as a strong-marking, straight-ahead defender for the Murray Bushrangers Under-18s, and the Murray Kangaroos in the VFL. In 2000, the Northerners picked him up with their fourth round selection (number 57) in that year’s Rookie Draft.

David made his senior debut for the Roos in 2001, quickly earning admiration for his courage, but also reservations about his lack of pace in the modern game. Sure enough, by 2003 he was on the outer at Arden Street, so North agreed to trade him, along with forward Digby Morrell to Carlton, to allow the Roos’ former Premiership ruckman (and 2002 Carlton Best and Fairest) Corey McKernan to return to Arden St.

In guernsey number 15, Teague became a key player in Carlton's defence during the Blues’ brief resurgence in 2004. Playing all 22 games in the season, he became a lynch-pin as he perfected the technique of zoning-off to be the third man up for the desperate goal-saving punch or mark. Although his statistical averages of 12 disposals, 3.6 marks and 3 tackles per game seem rather modest, it was David’s inspirational efforts that endeared him to his team-mates, and culminated in his award as Carlton’s Best and Fairest. His many selfless acts throughout the year were also recognised by the AFL Players Association, who presented him with their Most Courageous Player Award.

However, as AFL football continued to evolve, Teague’s responsibilities became heavier year by year, as the competition forwards just got taller and faster. Carlton’s defence lacked gifted talls - Luke Livingston and Karl Norman were the pick of them at 192 cm each - and they were more often required to mind faster-leading opponents. By 2005 therefore, it was clear that Teague was in limbo. Coach Denis Pagan experimented with him as a defensive midfielder, and even briefly as a lead-up forward, because of his strength in the air. He was even omitted for a week mid-season, but promptly starred for the Bullants, and was immediately recalled the week after.

In 2006, David managed only seven sporadic games through the year, and his 50th match in Navy Blue – an awful, heavy loss to Sydney at the SCG in round 22 proved to be the last of his AFL career. Despite spending the majority of the season in the red and white strip of the Bullants, Teague’s commitment every time he played was never under question – a fact that was recognised when he was named as the Blues’ Best Clubman at season’s end.

Teague was retained on Carlton’s list in 2007 as insurance, but wasn’t called up by the Blues again. Regardless, he maintained his trademark intensity for the Ants throughout an injury-interrupted year, and finished third in their Best and Fairest with 68 votes from 14 games. In 2008 he was appointed as senior coach of the Bullants, whilst continuing as a VFL player alongside club captain Josh Vansittart. He retired from the field in October of that year, taking up an appointed as a Development Coach at Carlton in addition to his duties as senior coach at Cramer St. Under Teague, the Bullants made it through to consecutive VFL Grand Finals in 2010 and 2011, only to lose to the North Ballarat Roosters on each occasion.

That achievement did not go unnoticed at AFL level, and David was lured to the West Coast Eagles in 2011 as an assistant to John Worsfold. He spent three seasons in the west, before having stints with St Kilda in 2014 and then moving in 2015 to the Grand Final bound Crows up to and including 2017. Lo and behold, the high scoring Crows would miss out on the big day, but the Blues would come knocking - a three year contract to Teague to join our reset coaching panel! Whilst optimism followed him, his tenure was caught short after 50 games as Blues Head Coach and he would leave the Blues after season 2021.