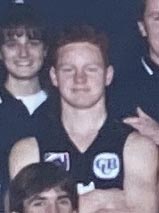 Danny Morgan was drafted with Pick 87 of the 1990 National Draft, he was recruited from Gippsland club Boolarra. He was recruited as tough Victorian schoolboy representative. In 1989, he represented the Victoria at U/15's level.

Morgan was a hard-at-it redhead. Unfortunately, Morgan didn't crack the seniors in his time at Carlton. He would end up at Essendon and would play 16 games for 2 goals between 1995 and 1997. In 1998, Morgan headed to SANFL club Port Adelaide.