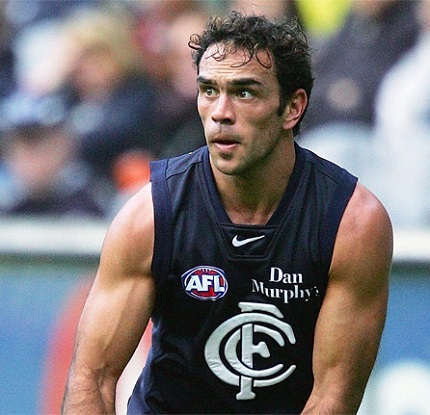 An honest player from a talented footballing family, Cory McGrath played 78 games of AFL football at Essendon and Carlton between 2001 and 2006. Hailing originally from Northam in Western Australia, he crossed the continent to achieve his dream, and his story is one of persistence and self-belief.

McGrath began his senior football career at South Fremantle in the WAFL before he was rookie-listed by Essendon. In 2000 he was elevated to the senior list, and twelve months later played his first senior match for the Bombers against Hawthorn in round 9, 2001. Essendon deployed him as a defensive midfielder, where his concentration and hard tackling were real assets. He played 13 matches in his first year, and was a member of each of Essendon’s finals teams in 2002 and 2003.

Meanwhile, over at Carlton, Justin Murphy - another fine player of Aboriginal heritage – had fallen out with the club and requested a clearance to Essendon. After lengthy talks, a swap was agreed to and McGrath was welcomed to Princes Park during pre-season training in 2004. Allocated the number 20 guernsey previously worn by Andrew Eccles, Cory knuckled down to earn a place in Carlton’s senior side.

Doing that took longer than he expected however, and it wasn’t until round 11 that he was promoted for his debut against the Adelaide Crows at Football Park, in one of the great games of the decade. Starting from the interchange bench, McGrath was prominent as Carlton staged a sensational revival from 25 points down at three-quarter time. Right on the final siren, Blues full-forward Brendan Fevola marked wide out on the boundary line, and kicked a sensational goal to win the match.

From then on, throughout his three seasons at Princes Park – which included the awful back-to-back wooden spoon years of 2005-06, Corey worked tirelessly to set a standard for his team-mates. Never the most skilful of players, he made up for his deficiencies with an outstanding work ethic and clever support play. Ranked among the top ten for tackles and “one-percenters” at Carlton in each of his three seasons, he appointed to the Blues’ Leadership Group in 2006.

McGrath’s 50th and last game for Carlton came in a humiliating loss to Sydney at the SCG in round 22, 2006. His commitment and loyalty to the club deserved a better conclusion, but sport, as in life, is not always fair. After leaving Princes Park, McGrath joined South Adelaide in the SANFL for one season, before returning to Victoria to sign with VFL heavyweights Port Melbourne. In 2011, he was a senior member of the Borough team that achieved the rare feat of playing through the entire season undefeated, to claim the club’s 16th Premiership. Aged 33, he retired from top level football in 2012.

McGrath was the eldest of three brothers who all had experience of elite-level football. Most successful was Ashley McGrath, who was part of the Brisbane Lions 2003 Premiership team on the way to racking up more than 200 AFL games. Toby McGrath won a place on the West Coast Eagles list - and later again with Essendon in 2002 -2003 – but wasn’t able to crack a senior game with either team. Two cousins - Martin McGrath (Richmond) and Dion Woods (Fremantle) also represented AFL clubs.