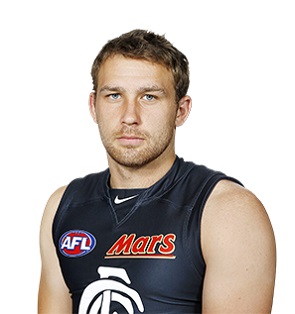 
Irishman Ciaran (pronounced Kieran) Sheehan originally came to Carlton as a prospective International Rookie back in 2009, having been invited to the club along with Zach Tuohy. While Tuohy stayed and established himself as a regular senior player, Sheehan (who was just 18 at the time) became homesick and decided to return to the Emerald Isle.

Back on his native soil, Sheehan resumed playing Gaelic football and made his senior debut for Cork in 2010. Skilful and courageous, he blossomed into one of the Irish code’s biggest stars, and in 2013 he was outstanding when he represented his country against Australia in the International Rules Series. This led to renewed approaches from Carlton, and in 2014 he agreed to have another crack at the Australian game.

Allocated guernsey number 47 by the Blues, Sheehan – soon nicknamed “Gus” by his team-mates – adapted quickly to the oval ball game, and by late in his first year, was pressing for elevation to Carlton’s seniors. That opportunity eventually came in early August, when a rash of injuries swung the door to selection open, and he was promoted for Carlton’s clash against the Gold Coast Suns on a Saturday afternoon at Docklands.

Starting alongside his countryman Tuohy at half-back, Sheehan showed remarkable maturity. Although his technique when bouncing the ball looked decidedly awkward, his straight ahead-play and penetrating left-foot kicking stood out as he collected 13 disposals, 5 marks and five inside-50 entries in a comfortable win for the Blues. From then on, Gus stayed in Carlton’s line-up through to the end of the season, and his impact on the team was underlined when he was judged Best First Year Player.

In 2015, Sheehan switched to guernsey number 21 and looked to consolidate his place in Carlton’s line-up. However, a hip injury set back his pre-season preparation, and then complications led to a string of surgical procedures that kept him off the field for the entire year. In the meantime, Carlton endured an abysmal season on the lower rungs of the ladder.

Sheehan eventually returned to the field with the Northern Blues Development Squad in May, 2016 - only to wrench a knee, and his progress was halted again. No player at Carlton has deserved a change of luck more than the popular Irishman, and the club recognised his commitment by re-signing him to a one-year rookie contract for 2017.

2018 - Sheehan would line up with EDFL club Avondale Heights.

Articles: Sheahan coming to the Blues

1972 GF - Vin Waite being stretchered off the ground.