Chris Jackson never played a game for Carlton in the two years he was on the senior list, he was a key position player recruited from TAC Cup team NSW Rams. He was Carlton's 4th pick in the 1996 National Draft, number 74 overall. He was originally from Hay Lions. He was a versatile, athletic type, he was often used as a trouble-shooter for the NSW Rams, and nearly swung the U/18 Grand Final in his side's favour when thrown into the ruck.

Jackson was also a top-up reserves player for Footscray in 1996.

After being delisted at the end of 1998, Jackson returned to the country where he had a long career in the Riverina Football league, finally retiring in 2015 -
http://www.dailyadvertiser.com.au/story/3325416/jackson-decides-its-time/

Note: there was another Chris. Jackson who played reserves grade football for Carlton in 1982. 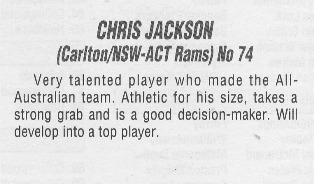