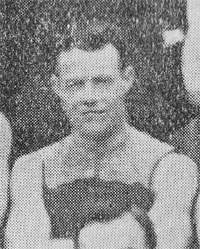 Tough played 25 games for Carlton after debuting in Season 1902. He kicked 2 goals in his time at the Blues. The Brunswick born Tough, was recruited from Zeehan on Tasmania's rugged west coast.


1895 September 21
A player named Tough was named in the 29 man Carlton squad (20 played) for the game against St.Kilda on the Blues "home ground" of Victoria Park.
Carlton's perennial problem of a lack of a permanent home ground, forced the Blues to use Collingwood's ground.
(The Blues and the Woods were quite "good friends" until the 1910 Grand Final)
This match against St. Kilda was in the final round of the 1895 season, and the game was drawn, Carlton 1.10 - 1.5
(Until 1897 behinds were recorded, but not counted in the score)
If this is Charlie and had he played, then he would been 15 years 139 days.
Match details of this game, have not yet surfaced.

1902 August 15 Friday
The Healesville and Yarra Glen Guardian.
Last Sunday (10 Aug) the South Australian and Victorian players and officials visted Healesville.
"The outing was much enjoyed by the visitors among whom was C. Tough (a former player for Healesville), but now one of the most prominent players of the Carlton Club."