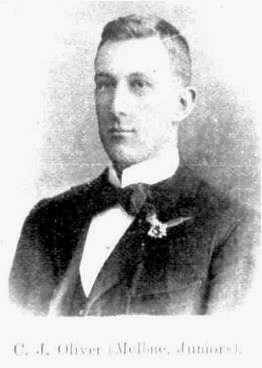 A practising doctor who joined the Australian Army Medical Corps during World War 1, Charles Joseph ‘Doc’ Oliver was one of ten Blues to be killed while on military service in that conflict. He died following a tragic mishap outside Seymour army camp, two days after Christmas, 1917.

Riding a borrowed horse, ‘Doc’ was returning to camp from the nearby township when the horse shied and threw him. He fell heavily onto the paved road, and was found unconscious a few minutes later. Quickly taken to his own hospital, he was at first diagnosed with severe concussion. But he soon lapsed into a coma and was transferred to the Base Military Hospital in St Kilda Road, Melbourne.

There, specialists found that Charlie had a fractured skull. He didn’t regain consciousness, and died of a cerebral haemorrhage on the afternoon of December 29. He was given a military funeral and buried at the Williamstown cemetery two days later.

Seventeen years earlier - as a young medical student - Charlie Oliver played at centre half-forward in his first and only football match for Carlton; against Melbourne at the MCG in July, 1900. His team was beaten by 35 points, but Charlie kicked a goal and joined that exclusive list of special young men to have worn the Navy Blue.

Oliver was born in Sofala, NSW (north of Bathurst). He played with Melbourne Juniors and then Carlton Imperials prior to his recruitment to Carlton.