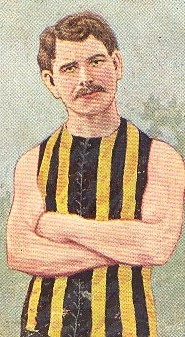 1890 May 3
Backhouse was named in the 22 man Carlton squad to play Melbourne in the opening round of the season.

May 10
Backhouse played in the match against St. Kilda on the St. Kilda Cricket Ground.

1890 June 7
The Australasian under the heading "Junior Football", a permit to transfer to another club was granted to a C. Backhouse.

1896 May 23
Backhouse playing in the centre, was one of Richmond's better players in their loss to the Blues.

1925 August 07
The Argus p4;
"Richmond suporters were grieved yesterday to learn of the death of their old centre player, Charles Backhouse. More than 25 years ago he was a champion centre-man with an ability for turning that was quite uncanny. He was a popular player, who played "hard but fair," as I heard it described. He played in the old players' match last year, and it was good to see the hearty way the veterans treated him."