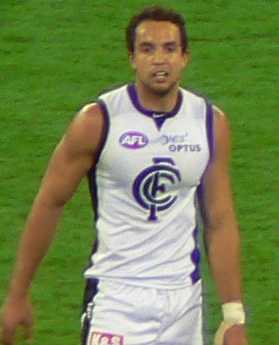 
Cain Jed Ackland was drafted by Carlton in the 2007 Pre-season Draft from St Kilda, where he had played 41 games in 2 years. Carlton saw him as a ready-made replacement for ruckman Barnaby French who had hung up his sizeable boots the year before. Ackland was even given "Barnaby's" former guernsey number 11. He had originally played at Port Power (drafted at pick 27 in the 1999 Draft) and had made his AFL debut in 2001. While at Port Adelaide, he was a member of their 2001 Pre-season Premiership side, and had played a total of 53 AFL games prior to joining the Blues. Out of contract with St Kilda at the end of 2006, Ackland joined Carlton with the club's first pick in the 2007 pre-season Draft. Ackland, who St Kilda had sought to retain, rejected St Kilda's two-year offer, accepting a three-year deal with Carlton.

Ackland debuted for Carlton in round 1, 2007, a first-up win over Richmond, He shared the ruck role initially with Cameron Cloke, then with Setanta Ó hAilpín and Josh Kennedy as the season wore on. Ackland made a strong impression in his ninth game for Carlton, a close loss to Adelaide, and continued the good work with 24 hitouts in our Round 10 win over the Bulldogs. All up, he played 20 games for the Blues in 2007. In his first season with Carlton, Ackland assumed the top ruck position. While serviceable in the role, he often struggled to compete with the league's other top ruckmen and was briefly dropped on two occasions.

But from then on, opportunities dried up and injuries at the wrong time derailed his second year. He played only a single game early in 2008, and despite being thrown forward at Bullants level, and occasionally kicking bags of 7 or 8 goals. By the start of 2008, Ackland was not considered among Carlton's top ruck selections and struggled for regular selection, playing only one game during the season. He moved to the forward-line at Carlton's VFL-affiliate, the Northern Bullants, where he kicked more than six goals in games several times during the year, but could not get back into the senior team., it seems his papers were stamped well before he was eventually delisted at the end of the 2008 season. Still a very valuable and capable player at local level, Ackland was picked up by SANFL North Adelaide for the 2009 season.

Ackland returned to South Australia in 2009 and joined North Adelaide in the SANFL, he played there for three seasons, retiring at the end of 2011. At Nth Adelaide in his three seasons he played 47 games and kicked 19 goals. Ackland returned to amateur football in 2012, playing for Broadview Football Club in the South Australian Amateur Football League (SAAFL), then moved back to Victoria and played for Newtown & Chilwell in the Geelong Football League in 2013.