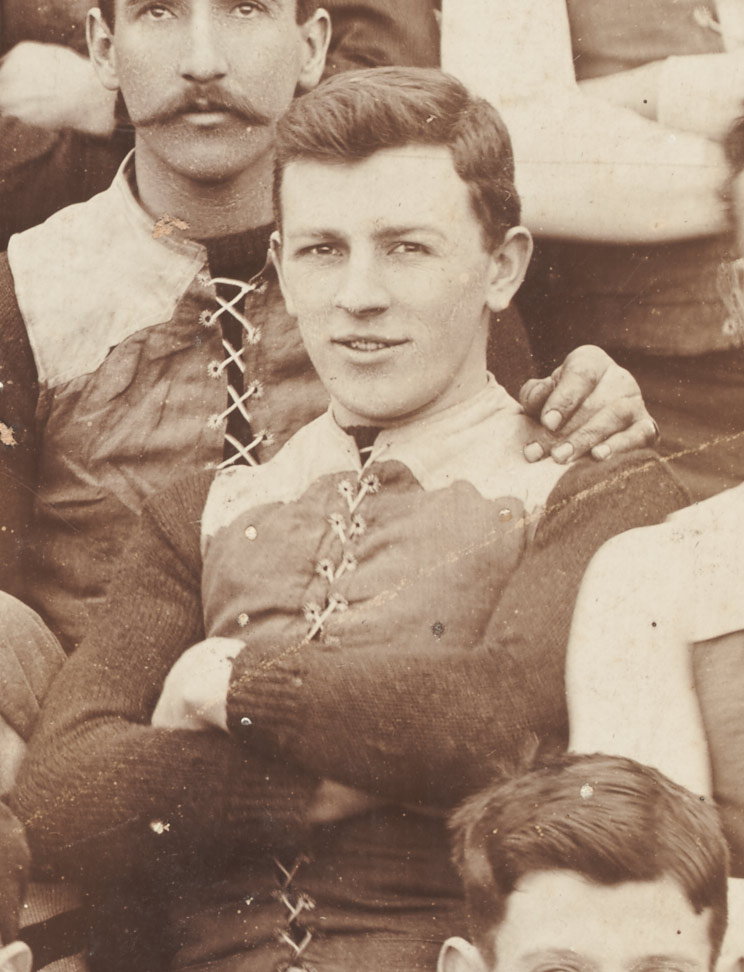 Charles Brooking ‘Brook’ Hannah was one of the shining lights in Carlton’s first year of VFL competition. A clever and versatile rover-forward who filled various roles in his 14 games, he was also part of a mass exodus from Princes Park after Carlton’s lack-lustre debut season.

Born in Heidelberg in 1874, Hannah’s path to Princes Park led from Melbourne University to Carlton Reserves, where it seems that a lack of opportunity sent him to Fitzroy in the last months of the VFA. Attracted back to Carlton by the chance to play in the newly-formed VFL, Hannah claimed a niche in our history when he was included in our team to play Fitzroy at Brunswick Street Oval in the first round of the new competition on May 8, 1897. Playing on a wing alongside captain Jimmy Aitken, Hannah was one of the Blues’ few positional winners in a disappointing 33-point loss to the Maroons.

From then on, however, he was a fixture in the team throughout the rest of the season. Shifted from the wing, to roving, the flanks, and later into the centre, he was invariably named among Carlton’s best players – even though wins were rare for the struggling Blues. Typical of newspaper reports of the day, The Argus wrote (in part) on July 19, 1897, after Carlton’s loss to Geelong;

‘There was one consolation for Carlton. Last week I said that the man who could stop McCallum of Geelong, had yet to be discovered. He was found on Saturday, in the lightly-built, unassuming, but unquestionably clever little footballer, Hannah, and Carlton were mightily pleased with his success"

Carlton rounded off the club’s first year of VFL competition in 7th place on the eight-team ladder, with a 2-12 win-loss ratio. Obviously, some players on Carlton’s list had been found wanting, and new talent had to be found if the Blues were to survive. A few other good, valuable footballers were simply fed up with losing, and had decided to seek greener pastures. For these reasons, eight members of the Carlton team that lost to Collingwood in the final round of that inaugural season – including Hannah - were not retained for another year.

Brook had always been a man of deeply religious convictions, and in 1899 – two years after his historic debut for Carlton - he responded to a call from the China Inland Mission. The Boxer Rebellion was creating havoc in many parts of the country, with westerners a primary target, but Hannah trusted his faith and set sail to do what he could for the many victims.

On April 04 1898 at the Carlton AGM Brook Hannah was presented with Past Service/Long Service certificate. 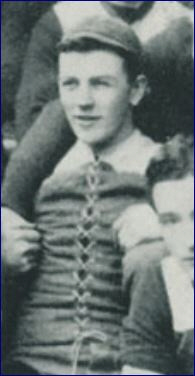 Having survived the chaos of the rebellion, Brook spent most of the remaining years of his life in the Orient. In 1904, he married a fellow missionary, only for the couple to suffer the heartbreak of losing their only two children in a cholera epidemic. Despite that tragedy, and many others over the ensuing half century, Hannah continued his selfless service to others.

1893 September 16:
Brook Hannah's name first appears for The Blues in the 26 named in the Carlton squad to play Melbourne at the Warehouseman's Ground, believed to the Albert Ground in St.Kilda Road.
He would have been aged 16 years, 353 days. He was also named in the squads for the other two remaining games for the 1893 season.

1896 Hannah is mentioned as playing in 9 games.

He could have played at least 57 games for The Blues in the VFA. The records so far, are incomplete.

One of the better players for the Blues during the dark days of the 1890's.
Played many good games across the centre and down back.

1894 Hannah was selected in a combined Victorian team to play the '94 Premiers Essendon in a charity match at Victoria Park in September.

1900 July 20 The Mercury (Fitzroy):
"Some anxiety is expressed by the relatives and numerous friends of Mr. Brooklyn Hannah, an old Heidelberg boy, who is in China. The gentleman in question (who is a relative of Mrs. S. M. McCallum, of Eaglemont) was some time ago very popular in this district. He was a prominent footballer (ultimately proving one of the best players of the Carlton club) and took a great interest in athleticism and all out-door manly games. Mr. Hannah, we believe, is so far safe from the fury of the Boxers and anti foreigner fanatics, as he is in the North-Western portion of China, which up to the latest advices, was not taking part in the rebellion and massacring crusade."