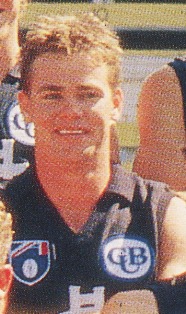 Another gifted footballer who was unable to make the most of his opportunities at AFL level, Brendon Parker represented Carlton in five matches over two seasons in the early 1990s, before becoming a bush football legend in the latter part of his career. Tall, agile and equipped with outstanding goal sense, he made his name at centre half-forward early on, but later became one of the most prolific full-forwards of his generation.

Parker’s journey to Princes Park started at Nathalia in northern Victoria in 1990, when he won his clubs’ Best and Fairest award while still a teenager. The following year he transferred to neighbouring Tongala, and went a step further by winning the Goulburn Valley Football League Best and Fairest. Midway through that season, Carlton recruited him in the 1991 Mid-Season Draft.

Parker was allocated guernsey number 18 (recently relinquished by Peter Sartori) when he began pre-season training in 1992, and it wasn’t long before his smart leading and accurate kicking was recognised with promotion to the Blues’ senior team for the important Sunday afternoon clash against Geelong at the MCG in round 12, 1992. Unfortunately for all concerned, the game was played in wet, slippery conditions and intensity triumphed over skill as the Cats won easily. Starting from the interchange bench, Parker was used sparingly, and gathered only a handful of possessions.

He kicked his first career goal the following Saturday when Carlton beat Adelaide at Princes Park, and by round 19 had played four senior games. Meanwhile, his form at Reserves level was consistently good. When Carlton lost that year’s Reserves Preliminary Final to Melbourne, Brendon kicked his 50th major for the season to become the team’s top scorer. Then he was named as Reserves Best First Year Player, and finished runner-up in voting for the Reserves Best and Fairest.

Season 1993 was a similar story, at least in the early stages. A succession of consistent efforts in the lower grade kept Brendon’s name before the match committee, and he was rewarded by promotion for the round 7 game against Sydney on a Sunday afternoon at the SCG. Again starting from the pine, Parker had taken four marks and kicked two goals shortly after half-time, when he twisted a knee in a tackle and hobbled off the ground.

That injury cost Parker seven weeks on the sidelines, and although he eventually came back to near his best with the seconds, the quality and depth of Carlton’s playing list (with names like Kernahan, Spalding, Koutoufides, Silvagni, Dean and Oliver ahead of him) meant that Brendon wasn’t called up again before the Blues’ shock defeat by Essendon in the 1993 Grand Final. After contributing three goals in Carlton’s defeat by North Melbourne in the Reserves Preliminary Final, Parker was awarded his second successive Reserves leading Goal-Kicker award – only to then be told that his services were no longer required. He had played a total of 35 Reserves games for the Blues, and kicked 90 goals.

In 1995, Parker joined SANFL club North Adelaide and, despite playing most of the time at centre half-forward, was the Roosters’ leading goal-kicker in four of his five years at the club. As the new millenium loomed in 2000, Parker moved back to Victoria for brief stints at his earlier club Tongala, and with the Newtown & Chilwell Football Club in Geelong. But it was his return to Nathalia in 2004 – when he settled into the full-forward post and capitalised on his wealth of experience – that propelled him into the region's sporting headlines.

Season 2004 saw Parker kick 92 goals for the year as Nathalia fell to Deniliquin in the Murray Football League Grand Final. The Purples – or “Purps” – responded magnificently to that defeat however, and won the next three flags in succession, defeating (in order) Tocumwal, Echuca United, and Barooga. Parker kicked the “ton” in each of those triumphs, booting 120, 108 and 106 goals respectively to head the League table each season.

In 2008, Brendon turned 37, and amassed another 83 majors in his last season for Nathalia, as the Purples made their fourth straight Grand Final. In an epic encounter, Barooga avenged their defeat of the previous season, and Parker retired after a career of almost 400 games.

The Riverine Herald writes about Brendon's appointment as coach of Tongala
http://nla.gov.au/nla.news-article253711459