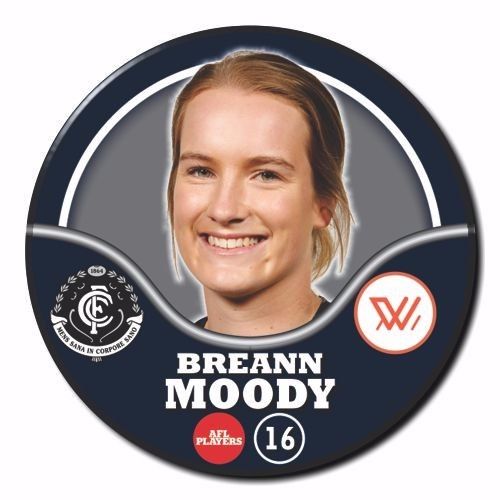 Breann Moody is a player on the rise, and that’s not because she’s a towering ruck. The young gun’s 2016 VFL season saw her well and truly stamp her authority in the ruck division throughout the competition. Senior women’s coach Damien Keeping says Moody’s flexibility to play various roles on the ground is a huge positive. “Breann has the versatility to play in front and behind the ball around the contests,” Keeping said. “This means we’ll have the potential to build an elite midfield around her for years to come, and makes her extremely valuable.” In addition to her rucking talents, Moody’s overhead marking will thrill Blues fans and makes her one of the most exciting players in the competition.


Sibling rivalry fuels Moody
A sibling rivalry led to Breann Moody’s AFL Women’s debut last Friday night. With family roots in horse training, the daughter of former racehorse trainer Peter Moody grew up a passionate horse rider and show jumper. But when Moody’s Cranbourne teammate and sister Cara was selected for the Women’s Academy, Carlton’s No.16 desired a similar path. “When she (Cara) got into the Women’s Academy, I was like oh that’s cool, I want to do something like that,” Moody said. “I was ready to move on from the horses, it is a 24/7 commitment and I was ready to have a bit of a break and this was the perfect opportunity. “Once the pathways started opening up, and I saw my sister be a part of that, and then the hype about the draft, I thought why not give it a crack.” Recruited to Carlton via pick 67 in last year’s AFLW draft, the 180cm tall Moody was bound to bolster the Blues’ ruck stocks. And during last week’s season opener against Collingwood, Moody was put to the test. “I think Kingie (Emma King) is one of the toughest rucks I’ll face and I felt pretty comfortable going up against her,” she said. “I feel like I performed well in the first round.” Over 24,000 fans filled Ikon Park that evening but when the Blues face GWS on Saturday, Moody has extra incentive to impress. With family set to travel from Queensland to support Moody and the Blues, Moody said she was excited to hit the turf in their presence. “Coming from Queensland, they’re all mad rugby fans,” she said. “It will be awesome to show them and teach them the game. “I feel confident and I’m excited to see how I’ll go and I think we’ve got a good shot at getting another win.” The Blues face the Giants at Ikon Park on Saturday 11 February from 3:35pm. - Lucy Watkin, Carlton Media February 10, 2017

Moody earns Rising Star nomination
Carlton ruck Breann Moody has been rewarded for her solid performance against Adelaide on Saturday night, receiving the Round 5 AFLW Rising Star nomination. Moody, who celebrated her 21st birthday on Sunday, racked up 29 hit-outs, 11 disposals and five clearances at Norwood Oval. Standing at 180cm tall, Moody battled it out in the ruck all night, tapping it to the advantage of her teammates as well as making a contest in the air.
Drafted from Cranbourne with pick No. 67 in the 2016 NAB AFLW National Draft, Moody received the Club’s Most Improved Player award at the inaugural best-and-fairest last year. Moody will be awarded $500 in prizemoney from NAB to acknowledge her achievement, with the overall NAB AFL Women's Rising Star to be awarded $20,000. All AFLW players 21 years and under as at 1 January 2018 and who have not previously been nominated as a rising star, qualify for consideration for the award. Carlton takes on Melbourne this Sunday at Ikon Park in Round 6 of the AFLW competition. Fans are encouraged to wear orange to the game, as the Blues play in their CARLTON RESPECTS match – raising awareness around gender equality for the prevention of violence against women. - Danielle Balales, Carlton Media.

Moody would be voted into 5th place overall in the 2018 NAB AFLW Rising Star Award with 10 votes.

Loynes, Moody share top honours
Couageous midfielder Katie Loynes and the Club’s Rising Star nominee Breann Moody have been crowned joint winners of Carlton’s 2018 AFLW Best and Fairest award. More than 350 guests packed Luminare in South Melbourne to witness the close count, with the winning pair polling 42 votes each, narrowly edging out key forward Tayla Harris who finished on 41 votes. Standing at 180cm tall, Moody was recruited from Cranbourne with pick No. 67 in the 2016 NAB AFLW National Draft and was named the Club’s Most Improved Player at last year’s inaugural Best and Fairest count. The 21-year-old continued her development this season, taking the responsibility of senior ruck duties throughout the year. She was recognised with a Rising Star nomination in Round 5 for her standout game against Adelaide at Norwood Oval, gathering 29 hit-outs, 11 disposals and five clearances. Tough-as-nails midfielder Katie Loynes was Carlton’s most consistent performer in the midfield. In Round 7 the childhood Bluebagger racked up 14 disposals and kicked a goal, while constantly extracting the ball from the bottom of the pack. Taken with pick No. 110 in the 2016 AFLW National Draft, Loynes was nominated for the AFL Players’ MVP Award, as well as the Most Courageous Award. Head of Football Andrew McKay praised the pair’s on-field efforts this season. “Katie and Bre worked tirelessly in every game they played and they should both be really proud of their performances,” McKay said. “Bre continues to grow as a player, not only with her tap work in the ruck, but also her second and third efforts around the ground – she has a desire to keep developing as a player and that’s a great quality to have. “Katie is a true competitor and you know what you’re going to get when she takes to the field each week. She chases, tackles, defends and gets herself in the right positions. Both players are worthy joint winners of the Best and Fairest this season.” In a testament to her tremendous season, Loynes’ contribution to the team also extended beyond the playing field – accepting the ‘Blue Bloods’ award. - Danielle Balales, Carlton Media