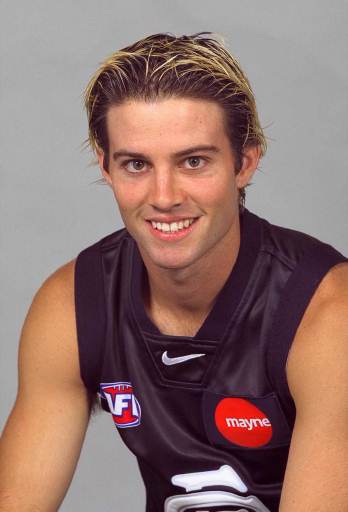 
Drafted at Pick 31 in the 2000 Draft, Campbell was a smooth left foot midfield / defender from Tongala via the Murray Bushrangers U/18's. Campbell's father Des, and older brother Brad both played for Melbourne, and there was much talk at Draft Time that we pipped the Dees with this selection.

Campbell, given #35 after the great Peter Dean retired (in between was Jeremy Dukes), played in only 11 games for the Blues. But it must be said that injuries really did hurt Campbell. A back injury would hinder his progress in his first season at Carlton in 2001. A sternum injury would delay his start to 2002 but he finally made his debut in Round 10. After playing the next 7 games, an ankle injury would prematurely end his season. He was restricted to just 3 games late in 2003, after battling leg and eye injuries. In 2004 he had to battle a thumb injury and failed to play any senior games before being delisted at the end of that year.

His foot skills were very high and with that level of ability Campbell should consider himself a bit unlucky. In particular, fans recall one intra-club pre-season game where Campbell played back-pocket on emerging star Brad Fisher, and absolutely nailed him despite a 2 inch height shortfall. Campbell also ran forward and kicked 2 goals. However, shortly after Campbell broke his hand and was out again.

2006 - Kouta winner of Dancing with the Stars