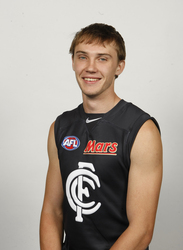 Bray was identified by Carlton through the NSW Scholarship process in 2009, before his progress led to a formal Rookie status for Season 2011. At that time, Bray was taken with the club's fifth selection, and pick 78 overall in the Rookie Draft.

Over two seasons with the Bullants (seniors and reserves) Bray showed a good work ethic and a nice pair of hands, but come the end of Season 2012 Bray was released by the Blues.