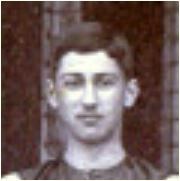 Bill ‘Brickie’ Woodhouse played as a follower (the equivalent of our modern ruck-rover) in Carlton’s VFL debut match against Fitzroy at the Brunswick Street Oval on Saturday, May 8, 1897. A consistent, honest footballer with a wealth of experience, ‘Brickie’ was one Blue who went down defiant that afternoon, as Fitzroy thumped us by 33 points.

Some years before, William Theodore Woodhouse had begun a nomadic football journey at Melbourne Grammar, where his sporting achievements overshadowed his academic pursuits, and where he probably picked up the nick-name ‘Brickie’ as a play on his surname. By his eighteenth birthday, Woodhouse was playing senior football for St Kilda in the VFA.

After two seasons with the Saints, Brickie travelled to outback Broken Hill where he worked and played for a year, before returning to Melbourne in 1894 to link up with the Blues. By 1897, when Carlton joined seven other clubs to form the breakaway Victorian Football League, Brickie was one of the first players selected for our opening game.

While some of those who played in that historic match against the Maroons were found to be out of their depth, Woodhouse was as solid as always. Carlton’s rucks probably broke even on the day, although we were soundly beaten everywhere else. Brickie missed rounds two and three, then returned to the side in late May and strung together six matches that brought one win, and more heavy defeats for the Blues.

Through all that, however, Brickie Woodhouse battled on, sometimes even taking the responsibility of leading Carlton’s rucks. He missed another two games late in the year, before finishing the season strongly to be among the Blues’ best players in the last three matches of a bitterly disappointing season.

Carlton finished our debut year in the VFL with two wins and twelve losses. The only team to fare worse than us was Brickie’s former club, St Kilda. Therefore, it no doubt came as a shock when he told Carlton that he would not be returning to Princes Park in 1898, but instead would be returning to the Junction Oval to play with the Saints.

From this era of consummate professional football, it is interesting to ponder those far-off days when the VFL was a staunchly amateur competition, and sportsmanship was a quality prized above all others. Brickie Woodhouse would have left Princes Park with the handshakes and best wishes of his team-mates, on the way to one last season at St Kilda – a year that produced seven games and two goals for him, and another wooden spoon for the Saints.

At the Carlton AGM April 04 1898 Bill Woodhouse was presented with a Past Service/Long Service certificate.


1894 May 5
Woodhouse debuted for Carlton in the V.F.A. round one clash against Footscray.
Bill Woodhouse would have been aged 20 years, 233 days.

Between 1894-1896 Woodhouse was mentioned in 20 games, his name appears in many more team squads.
He could have played 47 games and scored at least 8 goals.
Team and match details in the 1890's are sketchy, to say the least.

Carlton's on field performances were poor, and they did not feature in the big games of the season like they used to do.
This, and coupled with the fact that the country was experiencing a severe economic depression, the newspapers may have been cutting costs by limiting reports.

Woodhouse was a runner, and he and Carlton skipper Tom Blake would compete in cross country races.
They would miss the odd game through training or competing.
Both ran in the 1896 ten mile championship held on September 19, starting and finishing at Caulfield, and ran through the fields surrounding Rosstown, now Carnegie.
Blake was twice the Victorian Cross Country Champion.

In 1895 on April 5, W. Woodhouse was elected to the committee at the Carlton AGM.

1934 The Argus, 1 December.
"The funeral took place at Brighton Cemetery yesterday of William T. Woodhouse, formerly of Park Street St. Kilda, who had for many years conducted a chemist's business that was established by his father more than 60 years ago at St. Kilda.
In his youth Mr. William T. Woodhouse was a well known athlete. He was a founder of the Melbourne Hare and Hounds, and he played League football for many years with the Carlton and St. Kilda clubs.
He was also a leading member of the Royal St. Kilda Yacht Club.
While he was recuperating in Tasmania from an attack of influenza he died suddenly from heart trouble."

He was born in St Kilda, and passed away November 24 1934 in Launceston aged 61.
Woodhouse was married with three daughters and a son.