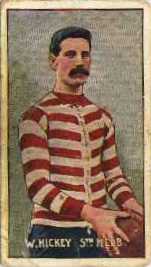 Hickey represented Carlton in a single game of footy in Season 1907. His only game was a defeat by St Kilda at Princes Park by 26 points. He had started his career South Melbourne in 1902 where he had played 45 games and scored 1 goal.

He was originally recruited from Wangaratta.