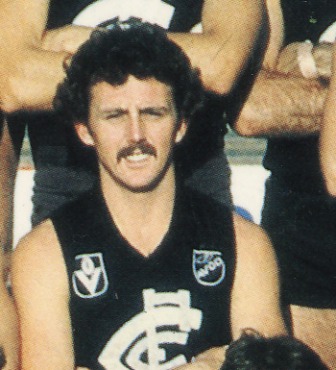 Late in 1981, while Carlton was en route to our club’s second VFL Premiership in three years, news broke that the Navy Blues had signed another West Australian star from the Perth Football Club, in 23 year-old Allan Montgomery. A noted aerialist with sometimes freakish ability, Montgomery was regarded in some quarters as having as much potential as Peter Bosustow – a fellow Perth product who at the time was enjoying a sensational debut season at Princes Park.

Upon his arrival at Carlton, Montgomery found himself competing for a place in a star-studded playing list. Even so, his pre-season form was impressive, and he was named to make his debut at centre half-forward against Fitzroy in the opening round of 1982. Wearing guernsey number 18, he showed that he could demand the football, and kicked two neat goals in an honest first-up effort that ended in a contentious draw.

In his second match, against Essendon the following week, Montgomery was relegated to the bench, and got just the briefest of runs during the Blues’ 26-point loss. After that, he played out the rest of the year with the Reserves, where his class soon shone through. Although he was a consistently good contributor for the seconds throughout the year, he wasn’t able to reclaim a place in Carlton’s senior team before September rolled around, and the Blues won yet another flag when they vanquished Richmond by 18 points in a torrid ’82 Grand Final.

In 1983, Montgomery’s task didn’t get any easier. Three of his five senior matches began from the bench, before Carlton took on Essendon at Waverley in round 22, and Allan’s fortunes took a turn for the better when he was shifted back into defence to mind the opposition’s resting ruckmen. Whilst the Bombers won easily, Montgomery stuck to his task and was one of Carlton’s few winners in a game that relaunched his career. From then on, and for the next 12 months, he was one of the Blues’ first-choice defenders.

Allan played his first finals match when Carlton fell to Essendon in the 1983 Elimination Final at Waverley Park, and in 1984 notched up another 18 games, mainly as a half-back flanker. The Blues wound up in third place on the ladder that year, only to bow out of Premiership contention during the Semi Finals, at the hands of Collingwood.

Barely nine months later, Montgomery’s VFL career was prematurely ended when his father fell ill, and he asked for a clearance back to Perth on compassionate grounds. His initial application attracted a $10,000 price tag from Carlton, but when the circumstances were made clear, good sense prevailed, and he was released without a fee. His departure may have been unexpected, but Allan’s 33rd and last game in navy blue at least finished on a positive note; with a 25-point win over St Kilda at Princes Park in round 13, 1985.

Back home, Montgomery picked up where he left off with Perth, although his football career tailed off somewhat when he began training as a firefighter.

To the memory of 'Monty'. A tribute to Allan Montgomery.
https://www.carltonfc.com.au/news/880247/to-the-memory-of-monty-a-tribute-to-allan-montgomery