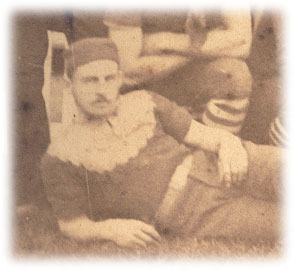 1875 September 18
A. & Edward Coventry were named as committeemen of the South Yarra Standard Cricket Club. (E. Coventry was vice captain.)

1876 March 27
There were two players named Coventry on the committee of the South Yarra Standard Football Club, and Edward Coventry was named it's captain.


1879 Carlton picked up some good new players during the season in Dick Frayne, A. Coventry, Eddy M. Brookes and T.Souter.
(The Carlton Story, H.Buggy and H.Bell, p47)

1879 A smart and active little player, very plucky and determined, and on the wings has proved himself useful.
(The Footballer 1879. p28)
The above photograph is from the 1881 Carlton visit to Adelaide. The name given on the photo is of M. A. Coventry.

1879 One of the mainstays of the team, "a smart and active little player, very plucky and determined."

1880 One of the best Carlton men of the 1880 season.
(Centenary Souvenir of Carlton Football Club,p15)

1880 A speedy little player on the wings and has particularly distinguished himself in coping with more stalwart opponents.
(The Footballer. 1880. p23)

1881 His quick turn of speed and adroit dodging, combined with good judgment, has made him invaluable as wing player.
(The Footballer 1881 p23)

1883 The Argus Saturday 7th. April reports that at the Carlton Football Club general meeting last night, N. Coventry would be presented with an illuminated address.
(a possible misprint, A. Coventry?)

1883 May 4
The North Melbourne Advertiser reported that Coventry had joined the South Yarra Football Club.

1885 May 25 Monday, Public Holiday.
Melbourne played Port Adelaide on the M.C.G.
The Age, Tuesday, May 26;
"The central umpire, Coventry, an old Carlton player, gave universal satisfaction by his decisions."
(A. Coventry was the umpire.)