One fleeting chance for glory.. 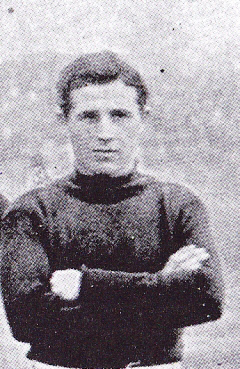 Reminiscent of the fictional story of Rocky Balboa in the hit movie Rocky, Alby Ingleman was a journeyman footballer who was unexpectedly handed one fleeting chance at glory. Like Rocky, he grabbed his opportunity with both hands, and won a Premiership with the Blues.

Ingleman joined Carlton from Brunswick in 1905. Under coach Jack Worrall, the Blues were scouring the country for football talent at that time, and the tough, no-nonsense centreman was signed up after impressing in a trial match. That was the good news for Alby. The bad news was that another specialist centreman named Rod McGregor had arrived at Princes Park in the same year.

Ingleman was a durable, honest and capable footballer, but McGregor was an out and out champion. With wingers George Bruce and Ted Kennedy, McGregor formed a superb centreline in Carlton’s 1906 Premiership year, and the trio continued their outstanding form into 1907. Meanwhile, Ingleman had to be content with just sporadic appearances, usually in defence.

Carlton lost just four games in 1907, and finished the home and away rounds two games clear on top of the ladder. Then, just minutes from the full-time bell in Carlton’s second semi-final victory against St Kilda, McGregor was hit across the face and his nose was broken. A compound fracture was diagnosed, and McGregor was out of the Grand Final.

After playing less than 20 games in three seasons, Ingleman was offered the chance of a lifetime by Jack Worrall when he was named as McGregor’s replacement for the Premiership decider against South Melbourne - and how he delivered. In a tight, even contest from the first bounce, Ingleman was inspirational where the contest was at its fiercest. Living up to his nickname ‘Badger,’ he ran hard and straight at the ball all day, to be named among the Blues’ best in a hard-fought victory by 5 points.

In 1908, Rod McGregor returned to the Carlton team and went on to play in another winning Grand Final for the Blues. With his place in Carlton’s history secure, Badger Ingleman finished his career that year, and promptly disappeared from VFL records.

Alby was born Albert Edward Engleman, his father (John Frederick Engleman) anglicised the family name to Ingleman under with he played his football. He passed away at Caulfield on the 23rd December, 1970.