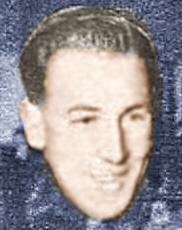 Albert Maxwell Thomas was a slightly-built, capable wingman who enjoyed considerable success in the lower grades during his seven-year stay at Princes Park between 1948 and 1954. Although he played only 24 senior matches, he was a member of two Under 19 and two Reserves Premiership teams, and in 1954 – his final season with the Blues - he was also voted Reserves Best and Fairest.

Not to be confused with John William Maxwell Thomas, who was destined to play two games for the Blues in 1966, A. Max Thomas was recruited to Carlton’s Under 19 team in 1948 from Brunswick YCW. Under the astute coaching of Blues’ legend Jim Francis, Max was a good contributor in Carlton’s ground-breaking Under 19 Premiership triumphs in 1948-49, and moved up to play Reserves football the following year.

A real terrier on the field, Thomas was agile and courageous, although prone to inconsistency. He picked up a third Premiership honour with Carlton Reserves in 1951, and was selected to make his senior debut against North Melbourne in round 1, 1952 against North Melbourne at Arden Street. The Blues kicked off the year with a comfortable 23-point win that Saturday afternoon, and Thomas did enough to hold his place in the side for most of the season.

When Carlton made the finals again, Thomas experienced the heady atmosphere of finals football at the MCG, playing on a wing alongside his captain Ern Henfry, and fellow winger Laurie Kerr in a cracker of a Semi Final against Fitzroy. Scores were level with a minute left on the clock, when the Maroon’s captain Alan Ruthven snapped a vital point to win the match for his side.

Thomas began 1953 in good form, and had added another eight senior games to his tally by mid-season. But after that his opportunities were few, and he had to be content with playing in another Reserves Premiership when Carlton defeated Essendon in a fiercely-contested Grand Final. Eventually, Max made it back to senior football in 1954, but after three more appearances he was relegated again to the Reserves, where his ability shone through, and he was a worthy best and fairest.

Despite that honour, it was obvious that Max’s days were numbered. Not quite a consistent senior player, but a class above Reserves level, he was de-listed at the end of that year (1954) and retired from playing football.

Thomas also wore Guernsey No. 30 whilst playing with the Blues reserves in 1951.