Carlton would be Runners-Up in the 1981 Night Series Competition.

Former Reservoir-Lakeside player, Rohan Burke, played his first senior game with Carlton in the Escort night championships against Richmond. Rohan, who is the son of former Carlton player Gerald Burke, was far from disgraced in his first senior appearance. The youngster was recruited from Reservoir-Lakeside and was residentally tied to Collingwood. But he went to the Blues under the VFL father and son rule. - Inside Football.

Essendon staged a stunning fightback to charge from behind to defeat Carlton by 24 points. The final score of Essendon 65 to Carlton 41 does not truly reflect the standard of the battle. At half-time you wouldn't have backed Essendon with bad money. They trailed by 16 points against a Carlton side which had control in most positions around the ground. The Blues led 4.0 to 1.2 at half-time. Wrong-footed by the fierceness of Carlton's tackling, particularily on the backline, the Dons failed to goal in the first quarter and didn't score their first goal until 16 minutes into the second quarter. Carlton dominated the game so much in these two quarters that they should have been further ahead. Coach David Parkin would have been extremely happy with his defence. Bruce Doull, Mark Maclure, Wayne Harmes, Des English and Ken Hunter stuck to the Essendon forwards like their shadows. In front of goal the picture was nowhere near as bright. Even so, Carlton had every reason to be confident at this stage that they could go on and win.

But they hadn't reckoned on the coolness of coach Kevin Sheedy in the crisis, or on the 1981-style fighting spirit he instilled into his team. Sheedy swapped players around all over the ground until he could come up with team balance to provide drive. It would be true to say the Dons then stunned the Blues by slamming on 8.9 to 2.5 in a second half onslaught that had the crowd roaring.

This is also the match where Timmy Watson leapt over Bruce Doull's outstretched hands, and Wayne Harmes' desperate lunge, to form some footy folklore for our esteemed opponents. 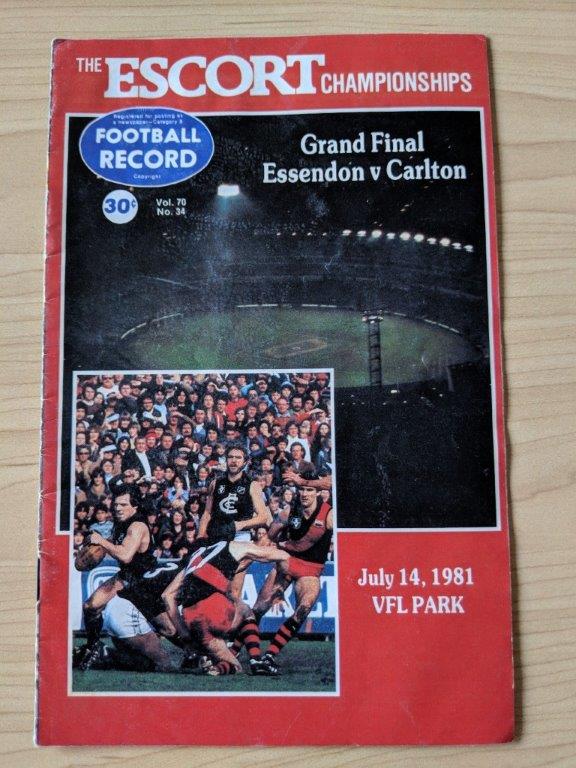