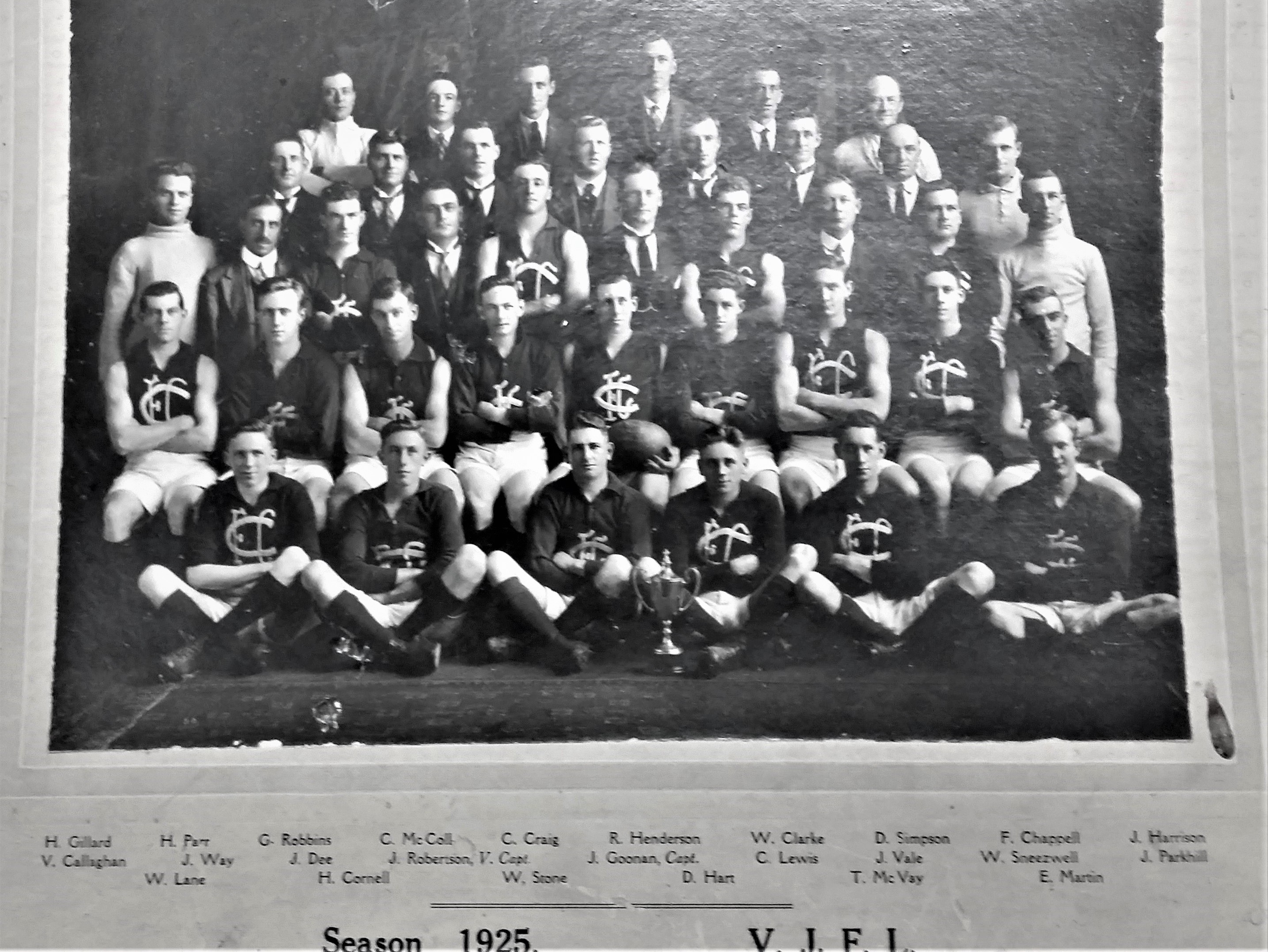 The names on this photo refer to those in the third row to the front row. The names of the two back rows, at this stage, are missing
.* J. Parkhill was presented with a silver cup for best player for 1925 at the 8th Annual Meeting of the Carlton Second Eighteen on March 02 1926. (Trove: Age March 03 p9)
Could this be Parkhill's cup in the photograph?

Note: J. Dee second front row third from left, seems to the only one wearing the 1923 - 26 guernsey with the white stripe. Perhaps the Reserves had to wear the Senior's cast offs.


Starting this season the Carlton Football Club committee brings in a rule "compelling emergencies and senior reserves to play with the second eighteen."

Opening round of the season.
May 02
Carlton played South Melbourne at Princes Park
"Carlton beat South Melbourne at Carlton before a fair attendance.
The play was close and scrambling, with little between the teams in the opening stages.
South lead by 6 points at the interval.
In the third quarter Carlton rallied, and added three goals.
Both sides were now playing splendid football, with Carlton forwards predominating.
Carlton, under the leadership of Goonan (captain and coach), who handled his strong side well, ran out winners by 14 points."
(Age May 04 p5)
Carlton won;
Carl; 11.15.81
S.Melb; 10.7.67
Goals; Blackmore 4, Cornell 2, Humphreys, O'Halloran, Dunn, McDermott, Lane.
Best; Clarke, Cahill, Goonan, Blackmore, Parkhill

May 16
Carlton played Melbourne at Princes Park.
In front of a "fair attendance," the Blues had Melbourne on the back foot from early on in the game.
The home team was too systematic with every player playing well and contributing to a big win.
Carlton won;
Carl; 20.18.138
Melb; 11.12.78
Goals; Davis 7, Dunn 6, Stone 4, Cahill 2, Kick.
Best; Davis, Dunn, Dee, Parkhill, McSwain, Lane.

Carlton fourth; Played 16, Won 12, Lost 4, Drawn 0, 87.85%, Points 48
In the Geelong Advertiser, the percentage is reversed as what happens in SANFL with the team on top of the ladder having the lowest %.
The senior ladder is given as the same, (lowest % at the top).

September 25
Carlton played South Melbourne in the Second Semi Final
South protested at the result. Their full back was about to kick off after a behind. He was in the action of kicking when he twisted his ankle and fell over, a Carlton player jumped over him and booted the ball through for a goal.
Carlton won by 1 point
Carl; -- 4.8 -- 5.13
S.M; -- 3.8 -- 5.12
Goals; Dee, Robertson, Cornell, Lewis, Cahill
Best; Charleston, Evans, Kelly, Vale, Clarke, Way, Cahill, Goonan, Robbins, Robertson, Humphries

October 03
Carlton played Fitzroy Reserves in the Reserves Preliminary Final at 12.30pm
The Maroons included 8 senior players and their experience told in the end.
Fitzroy kicked with the aid of the wind in the first quarter.
The Maroons forward line was on top and the Blues had trouble penetrating their opponents defence.
Carlton even with the wind in the second quarter only managed to equal Fitzroy's score against it.
After half time the wind freshened and the Maroons dominated the term to secure a match winning lead of 39 points at the last break.
The Blues fought back and with a few late goals reduced the margin to 16 points.
Carlton team;
Backs; Parkhill, Humphries, Cahill
Half backs; Dee, Charleston, Evans
Centres; Martin, Goonan, Kelly
Half forwards; Robertson, Credlin, Fitzgerald
Forwards; Cornell, Way, Lewis
Followers; Vale, Clarke
Rover; Stone
Umpire; Caddy
Carlton lost by 16 points
Carl. 1.4 4.9 5.9 9.14.68
Fitz. 4.1 7.6 11.12 12.12.84
Goals; Lewis 4, Cornell 2, Stone, Fitzgerald, Robertson
Best; Martin & Goonan (centres), Charleston (half back), Cahill (back and following), Parkhill (back), Lewis & Way (forwards), Martin, Stone