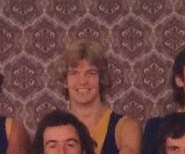 Peter Hinck played reserve grade football for Carlton in 1976, he managed to average just over a goal a game for the Blues.