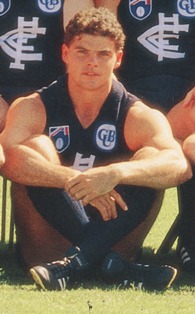 Christian Davidson was recruited from VAFA Club Collegians in the 1993 Pre-Season Draft, he was selected at pick 74, this was Carlton's sixth and final pick of the draft. Davidson also played reserve grade football for Richmond in 1991 and Melbourne in 1992 and 1996. He was originally recruited from Ashburton United.