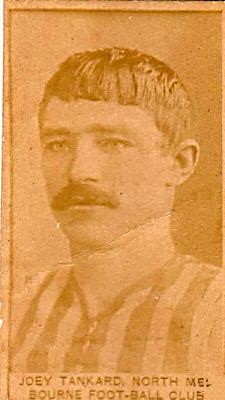 1882 The new recruit from Hotham, (North Melbourne) had a difference of opinion with Carlton superstar George Coulthard, he left the Blues and returned to the Hotham Football Club.
The two players then appeared on opposite sides when Carlton played Hotham at the East Melbourne C. G. on August 12.
In the first half the old quarrel between the two flared up again, and they came to blows. Tankard punched Coulthard in the face, Coulthard retaliated, and both were disqualified by the V.F.A. until the end of the season.

1882 September 1
At the V.F.A. meeting, Hotham F. C. pleaded on behalf of Tankard to be reinstated.
This was put to a vote and passed 9-4.
At the same meeting Carlton asked that Coulthard also be reinstated.
This was put to the vote, and rejected 7-6.
(This disqualification ended Coulthard's career. He became seriously ill in 1883, and died before the 1884 season opened.)

Tankard was named to play in these two pre-season matches.
He is not named in any further Carlton squads.
1882 April 29
Tankard played for Carlton against a Star of Carlton (23) at Princes Oval.
Named amongst the best of the new recruits.

1882 May 6
Tankard selected in the Carlton squad to play Northcote (23) at Princes Oval.

1886 November 15
Hotham Football Club player Joseph Tankard and four other men were arrested for the alledged assault on a 40 year old woman in Royal Park.
To read The Argus' article,
Click here> http://nla.gov.au/nla.news-article11579551

1897 August 07
Joey made a reappearance with North Melbourne in the match against Richmond on the East Melbourne Cricket Ground.
The Age August 09 p3, "A feature of the game was the reappearance of the of the old North player, "Joey" Tankard who can still "go up" and mark, though his long kicks have become pretty short compared with the old days."

1931 The Mercury (Hobart) December 10 p14;
"Old time footballers in Hobart will regret to hear that "Joe" Tankard originator of finger-tip high marking which has become the most spectacular feature of Australian rules football, is in Melbourne Hospital suffering the effects of a stroke."
To read the rest of the article click here> http://nla.gov.au/nla.news-article29935682